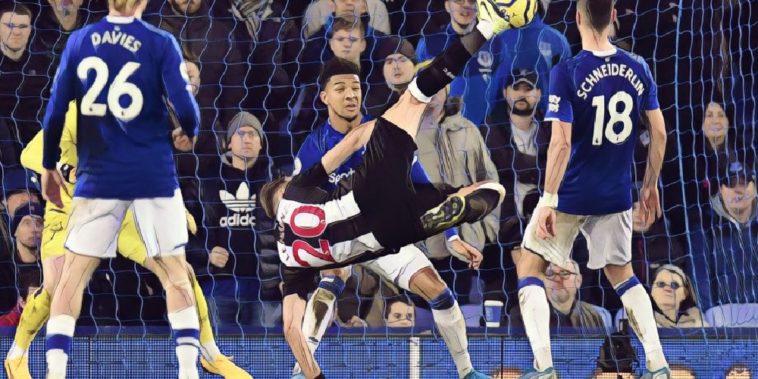 Everton had dominated the contest against their injury-hit visitors and would take a first-half lead through Moise Kean’s first goal for the club, before Dominic Calvert-Lewin doubled their lead with his 12th goal of the season in all competitions.

The Toffees looked to be cruising to a home win before a remarkable finish, Newcastle only registering their first shot on target in the 88th minute before defender Lejuene’s two-goal salvo remarkably rescued a point at the death.

Newcastle boss Steve Bruce admits he was left stunned following his side’s late fightback, admitting the Magpies ‘rode their luck’ to secure a valuable away point on Merseyside.

“It’s quite remarkable,” Bruce told Match of the Day. “I can’t fault the players for their endeavour. Joelinton was struggling after 50 minutes; I nearly put a centre-half up front.

“We keep showing determination. We were a tired team tonight but we found a bit of energy from somewhere.

“When we scored Mike Dean said there are 40 seconds left – and you’re thinking ‘can we score in 40 seconds?’ We rode our luck certainly but they never gave up.

“There is a good spirit and attitude in this team – we looked tired but we played people out of position. We didn’t have much coming off the bench in terms of forward players but the attitude was fantastic.

“It’s a wacky game that’s for sure – but it’s great. It just shows you shouldn’t leave a game early.”

Carlo Ancelotti was similarly disbelieving after seeing his side allow three points to somehow slip from their grasp, admitting Everton must keep their concentration for the full ninety minutes after controlling the majority of the contest.

“There are things in football you cannot control. We conceded without any reason but the performance was good,” Ancelotti said. “We played a fantastic game and we were unlucky but nothing changes – our Premier League continues, we have to stay focused.

“We were 2-0 up, had opportunities to score and we played attacking football. I’m really pleased with the performance. These results are not frequent but they can happen.

“We have to stay on the game for 90 minutes but I’m not saying anything to my players. They played well and it can happen. It’s just unlucky for this game.”