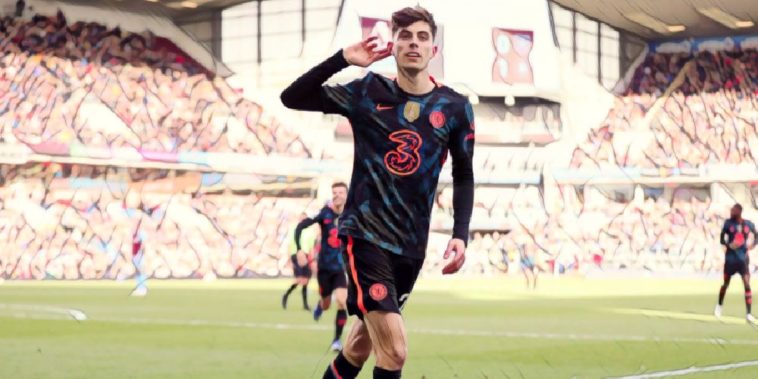 Chelsea solidified their place in the top four with a comfortable 4-0 win over struggling Burnley in what was a game of two halves.

It would be Burnley who had the better of the opportunities in what was a goalless first half, with Dwight McNeil spurning the best chance of the lot, blazing over from eight yards after Edouard Mendy had failed to deal with a cross.

Just two minutes into the second half, though, the Clarets would be made to rue their missed chances as Reece James gave Chelsea the lead. The wing-back received the ball in the box and then twisted past McNeil to create space for himself before blasting in a right-footed strike from a tight angle.

The goal really got Chelsea moving, and five minutes later, Kai Havertz doubled their advantage. Christian Pulisic played an inviting cross over from the right to the back post, the ball being met by the German who headed home.

Three minutes later and it was game over, Chelsea again getting joy down the right as Reece James slid the ball across goal that was finished off by Havertz.

Three became four with 20 minutes to play as Pulisic thumped home after James Tarkowski had diverted the ball into his path following a low ball into the box by Saul.

Speaking after the game, Thomas Tuchel was pleased with his side’s overall display, and said he believes that they are ‘constantly getting better and better’.

“The first goal helped us. In these matches that are so tight, that obviously gives you a lot of confidence,” he told Match of the Day.

“It’s a good performance overall because it’s not easy to come to Turf Moor. It was a good team performance, very focused. It improves my impression that we’re constantly getting better and better. We deserved to win and it was a very good second half.

“The pitch was incredibly dry so it was not easy to play fast. The ball was constantly stuck between our legs. When you don’t win the second balls you can be in trouble. We never lost the positivity and trust in ourselves. In the second half we found the spaces better and that was the key.”

Reece James continued his comeback from injury with an impressive showing, proving a constant threat going forward, and Tuchel was full of praise for the England international’s influence on the side.

Back with a bang. 💥💥 pic.twitter.com/CeYR1SpbZy

“It’s incredible how much quality he brings to the team,” he said. “You keep forgetting it because he’s eight or nine weeks out and you get used to the situation.

“Then he comes back and you remember the influence he can have. It’s the same for Ben Chilwell. They’re hugely important for the structure of this team.”

Next up for Chelsea is a trip to Carrow Road to take on bottom side, Norwich City.