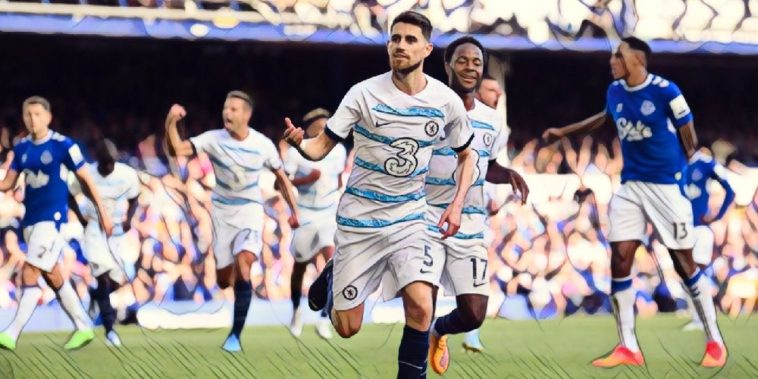 Thomas Tuchel admitted Chelsea are not currently ‘at their highest level’ as they kicked off their Premier League campaign with a 1-0 win over Everton.

The only goal of the game came in the eighth minute of first-half stoppage time, Jorginho scoring from the spot after Ben Chilwell had been clumsily brought down by Abdoulaye Doucoure.

It was a match that won’t live particularly long in the memory, with the game full of interruptions throughout, including a nasty-looking injury to Ben Godfrey in the first half.

Chelsea came into the game after what has been a difficult pre-season, with Thomas Tuchel airing his concerns and frustrations on more than one occasion, while the club have missed out on a whole host of transfer targets.

Goodison Park has been somewhat of an unhappy stomping ground for West London club, with their last win at the famous old stadium coming back in 2017, and Tuchel was satisfied to claim all three points despite his side not being at their best.

“We have struggled in the last seasons to get points here – and we have the points,” he told Sky Sports. “A win is a win – it’s the most important thing for everything but we have to get better.

“We are maybe not at the highest level – we have brought players in but they came in late, pre-season was a bit turbulent but the last week of training was promising.

“Some situations in the first half were quite good and second half I think we had simply not enough movement on the ball – with less movement, there were more ball losses.

“It was a bit of a strange second half without the rhythm from the team, and interruptions, but we hung in and did what was necessary to keep a clean sheet and we go from there.”

Chelsea have brought in Raheem Sterling, Kalidou Koulibaly and Marc Cucurella so far this summer, though have also been linked with Barcelona’s Frenkie de Jong, Pierre-Emerick Aubameyang and Memphis Depay in recent weeks.

The German admitted that he is looking to add new faces to his squad to take his side to ‘a new level’, with the Blues looking lacking in the goalscoring department.

“If we can add, we add,” he said. “We are open to everything and I think we can use new energy and new legs and fresh input to bring us to a new level.

“If not, we will push this team but I think we could use some more input and some more quality. We are on it.