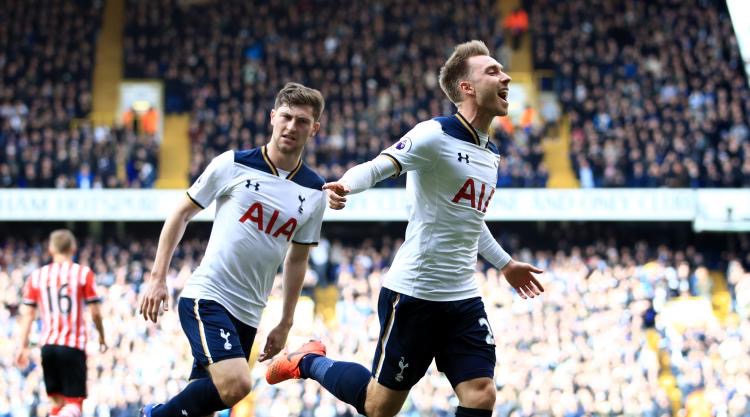 Tottenham battled past a defiant Southampton side to win their tenth consecutive Premier League game at White Hart Lane.

The big question mark before the game was whether Pochettino would start with Heung min Son or Vincent Janssen to replace Harry Kane in attack, and it was the South Korean who got the nod. Kyle Walker and Victor Wanyama overcame slight knocks to start.

From a Southampton perspective, England quartet Fraser Forster, Ryan Bertrand, James Ward – Prowse and Nathan Redmond all started the game along with in form striker Manolo Gabbiadini, who had scored on his first four Southampton appearances.

Just minutes into the game, the man instructed to fill the void left by Kane almost put Spurs ahead. Christian Eriksen curled a ball magnificently around the Southampton back line but Son could only shoot straight at Forster. A big chance for a man fresh from scoring a hatrick against Millwall.

Ten minutes later and Spurs were in front. Dembele did well to win possession and fed the ball into Eriksen’s path, who from 20 yards out curled a shot into the bottom left of Forster’s goal. A brilliant finish by a man who has now directly been involved in 10 goals in his last 6 games in all competitions.

Just moments later, and Spurs had almost doubled their lead. Eriksen’s corner was met by Alderweireld whose header was well saved low down by Forster.

30 minutes gone and Southampton’s talisman Gabbiadini was forced off with an injury, to be replaced by Shane Long. Spurs took full advantage and soon extended their advantage.

Southampton failed to clear the box with what seemed about ten deflections ended up placing the ball into Alli’s path, who went over from a challenge by Steve Davis. A soft decision but a penalty nonetheless. Alli made no mistake from the spot, sending Forster the wrong way.

As the half ended, any lingering doubts as to whether Spurs could cope without Kane seemed to be put to bed with an emphatic first half display.

Perhaps inevitably, Southampton picked up their game at the start of the second half and had soon halved the deficit. Bertrand whipped in a cross from the left which uncharacteristically evaded Alderweireld leaving Ward Prowse to tap in at the back post. A great week for Ward Prowse celebrating his first call up to the senior England squad.

Despite putting pressure on Spurs, Southampton failed to create many chances, with a long range Boufal shot the closest the Saints came to troubling Hugo Lloris’ goal.

Not a comfortable win for Spurs, with Southampton probably the better of the two sides in the second half.

Man of the Match: Christian Eriksen

We currently have vacancies for writers. If you are interested in writing about Southampton, join our writing team.