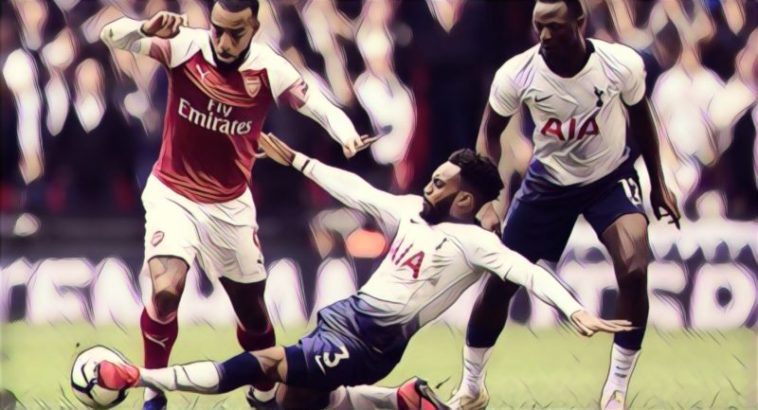 Mauricio Pochettino’s side knew that defeat to their North-London rivals would leave the Gunners just a point behind them in the race for a top-four spot.

The match was full of incident but low on quality, with referee Anthony Taylor awarding both sides a penalty and sending off Lucas Torreira in the dying stages.

Match official Anthony Taylor had a busy day at the office, awarding two penalties and dishing out a late red card. Taylor’s first big decision saw Spurs awarded a penalty for a push on Harry Kane. Whilst the push was clear, Kane had been in an offside position when the free kick was taken but this was missed by the linesman.

Taylor then awarded Arsenal a penalty of their own for a clumsy challenge from Davinson Sanchez on Pierre-Emerick Aubameyang. Whilst the penalty looked soft, Sanchez’s decision was certainly ill-judged and gave the referee a decision to make. Aubameyang ultimately missed the resulting penalty sparing Spurs blushes and costing the Gunners two points.

Whilst Taylor may have expected an event-filled game between the two North London rivals, I’m sure he would have hoped his refereeing decisions wouldn’t have had such an impact on the result.

In a game low on attacking quality, both sides were guilty of gifting chances to the opposition, with Tottenham’s Sanchez having a particularly torrid time. Sanchez’s rash decision to rush into a challenge led to Arsenal’s first goal, with Aaron Ramsey given the freedom of White Hart Lane to break free and score. The Columbian then gave away a late penalty for a needless challenge on Aubameyang, with the game heading into stoppage time.

Arsenal’s Shkodran Mustafi was guilty of a defensive lapse of his own, needlessly shoving Harry Kane while contesting an aerial duel. Kane succeeded where Aubameyang failed, slotting in the penalty to draw Spurs level having created preciously few chances.

These mistakes cost both sides and showed their defensive frailties which have left them both off the pace of the Premier League leaders.

Unai Emery has established a reputation for his bold selection decisions this season, by regularly dropping Mesut Ozil from the Arsenal squad and he continued to make brave calls against Spurs by dropping the German playmaker, Torreira and Aubameyang from the starting XI.

The Spaniard’s selection calls paid off, with his hard-working Arsenal side shutting Spurs down and breaking dangerously. Emery’s team selection demonstrated his determination not to pull any punches during his time at the Gunners and prevent star players becoming too comfortable

Going into last Saturday’s game with Burnley, Spurs had the chance to move within two points of top spot, one point from three games now means they could finish this weekend 11 points behind Liverpool and in a real race for the top four.

A congested fixture list with a small, injury-hit squad has taken its toll on Tottenham and their side looked physically and mentally drained today. Pochettino needs to galvanise his side in order to secure Champions League football for next season and push Spurs as far as they can in this seasons competition.

Ramsey leaves his mark on his last North London derby

Aaron Ramsey may be leaving for Juventus in the summer but he certainly can’t be accused of winding down during his final months at Arsenal. The Welshman changed the game after coming on at half time in the reverse fixture at the Emirates.

He followed up that performance with a goal today, breaking clear of Spurs’ wandering defence to round Hugo Lloris and slot the ball into an empty net. His hard work off the ball and marauding runs from midfield giving the Gunners a real threat on the break – something they will sorely miss next season.