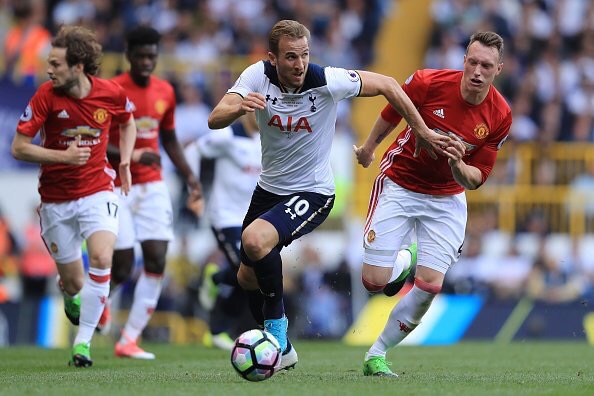 Tottenham Hotspur said goodbye to White Hart Lane with an emphatic performance against Manchester United. It was a game that encapsulated the gulf that has developed between the two sides in recent years. The energetic high intensity attacking football of Tottenham versus a lethargic negative Manchester United.

The atmosphere at White Hart Lane was electric, an incredible atmosphere. The Tottenham players certainly did the atmosphere justice with an intense quick start. Victor Wanyama gave the hosts the lead after just six minutes. The Kenyan peeled off Wayne Rooney at a corner and headed past David De Gea. The ball into the box from Ben Davies was perfect and gave Wanyama little to do, although it was made easy for him by Rooney’s half-hearted dopy marking.

Tottenham totally outplayed United in the first half and were incredibly unlucky not to get more goals. David De Gea making several saves to deny the likes of Dele Ali and Son Heung Ming to keep the score at 1-0.

Manchester United’s first chance of the game came when Anthony Martial tested the Spurs defence, cutting onto his right foot and curling a shot inches past the post. Martial inches away from levelling the game for Manchester United who could not break the Tottenham press leaving chances at a premium for Mourinho’s men.

Spurs were incredibly unlucky to be only 1-0 ahead at half time. They were soon rewarded for their play. A free kick for Spurs on the left hand side was fired into the box by Christian Eriksen found its way to Harry Kane who delicately poked the ball home. Poor defending from United and particularly Chris Smalling, Jose Mourinho appeared to be less than impressed when watching a replay of the goal.

Anthony Martial troubled Spurs again for United with a good run that ended in another curling shot that was shot off target. United appeared to be growing into the game at long last. They were soon rewarded when Martial ran past Kieran Trippier and picked out Wayne Rooney, Rooney able to be get a touch on the ball and put it past Hugo Lloris. However, the ball did take a small deflection off Jan Vertonghen.

Marcus Rashford spurned a late chance after being found by a delightful ball over the top from Michael Carrick but Rashford could not get his shot on target, curling the ball over the bar.

The game ended 2-1 to Spurs who bid farewell to their home of White Hart Lane in style. Manchester United certainly showed that they have no interest in the remaining league games as they look ahead to the Europa League final. However, United will want to go into that final with good momentum and will not want a repeat of this performance which was truly terrible.