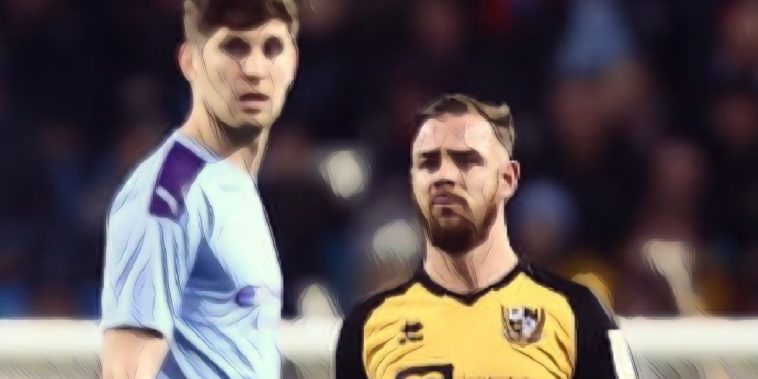 The Premier League champions booked their place in the next round with a comfortable 4-1 win at the Etihad, though Pope would make his mark on the occasion by heading home an equaliser for the League Two outfit after Oleksandr Zinchenko’s first-half opener.

Pope’s goal sparked a social media frenzy after Tweets from the forward dating back to June surfaced, the 34-year-old far from complimentary on the abilities of City defender Stones following a performance for England at last summer’s Nations League finals.

Pope suggested that he would score 40 goals-a-season if he faced the England international every week, comments which led to an ‘awkward’ encounter between the players after the Port Vale squad were invited into the Man City changing rooms post-match.

“They all dragged me in, the Man City players, but John wouldn’t speak to me,” said Pope.

“It was a little bit awkward. I shook his hand but he wasn’t too happy.”

Despite his comments, Pope was full of praise for Stones after their meeting, describing the 25-year-old as a ‘world-class centre-half’ – though the veteran couldn’t resist a further tongue-in-cheek tweet after finding the net against Pep Guardiola‘s side.

“It was only banter and people have dug it up because we’ve drawn Man City. All of a sudden it’s everywhere and people have been on my case about it. [Stones’] is a world-class centre-half. I was just saying he wasn’t very physical and that’s it. If people think I’m wrong, well, I don’t care.

“I spoke to (Benjamin) Mendy and he said all their players had battered him for weeks about it and they got him that wound up about it, and then obviously I’ve scored and he’s probably devastated.

“But I was just hoping I got a half chance to try to put one away. The last thing you want to do is get beaten 7-0 after everything that’s gone on Twitter, not score and everyone laugh. It was nice to shut a few people up to back up what I said but it’s water off a duck’s back. I wasn’t too bothered about it either way.”

See also – Best of the 2010’s: The five most iconic football matches of the decade