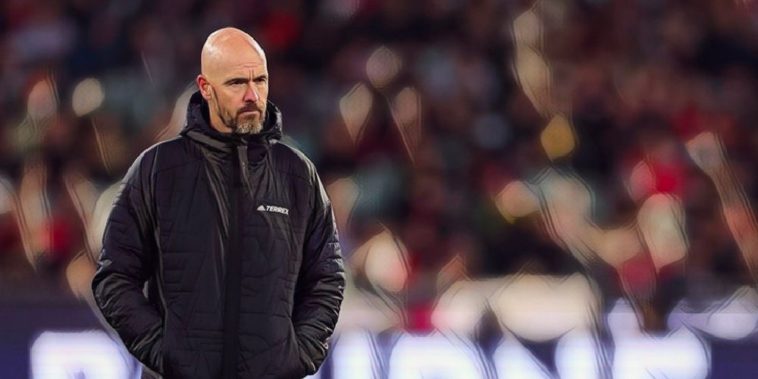 Erik ten Hag sampled his first taste of disappointment as Manchester United manager after his side squandered a 2-0 lead to be held 2-2 by Aston Villa in Perth.

Manchester United have enjoyed a largely positive pre-season under the Dutchman to date, comprehensively winning their first three games of their tour of Thailand and Australia against Liverpool, Melbourne Victory and Crystal Palace.

It looked as though they would be registering win number four after Jadon Sancho and a Matty Cash own goal had given the Red Devils a 2-0 half-time lead, though Leon Bailey fired home from the edge of the box to pull one back before Callum Chambers finished off a corner with the last action of the game to draw the Villains level.

Speaking to Sky Sports after the game, Erik ten Hag said he was pleased with his side’s performance and control before half time, but said they lost ‘focus’ after the interval.

“First half – really good. I think we controlled the game,” he said. “Good football. Good shapes of play. We had a lot of movement behind the defending line and make great goals.

“Then, 2-0 up at half time and a drop of focus. It could be that the guys are tired, but that is never an excuse. They have to perform, and it is what we didn’t do in the second half.

“But the first half, really good.”

The Dutchman was quick to say that his side’s second-half display was not down to the quality of the pitch – which rapidly deteriorated in some torrential conditions.

“There was a dip of focus, but I don’t want to make an excuse about the pitch or the weather,” he said. “We have to perform no matter what.”

Villa’s first came just four minutes into the second half after the Red Devils had been dispossessed high up the field, and the 52-year-old demanded his side ‘decrease the mistakes’ and learn from their second half display.

“Football is a sport of mistakes,” he said. “We have to decrease the mistakes, that’s clear, and we will.

“I have seen a lot of progress in these two weeks, and again, in the first half, I saw really good football. Really controlling and really dominating the game, but we have to learn from the second half. It is not possible that you give a throw away a 2-0 lead.

“I think in general, our front men, our forward players did really well – were really well connected, were really a weapon. I think it’s really difficult to defend [against]. We have a lot of movement, we have skills and they can finish.”

Asked if the disappointment could serve as a positive for his side going into the season, Ten Hag again stressed the importance of maintaining focus.

“That is what we have just said in the dressing room. A drop of focus is unacceptable. But I am happy with it [happening in pre-season] because now I can tell them that it cannot happen [in the future].

United round of their pre-season preparations with two games in two days, taking on Atletico Madrid in Oslo next Saturday before taking on Rayo Vallecano just over 24 hours later at Old Trafford.