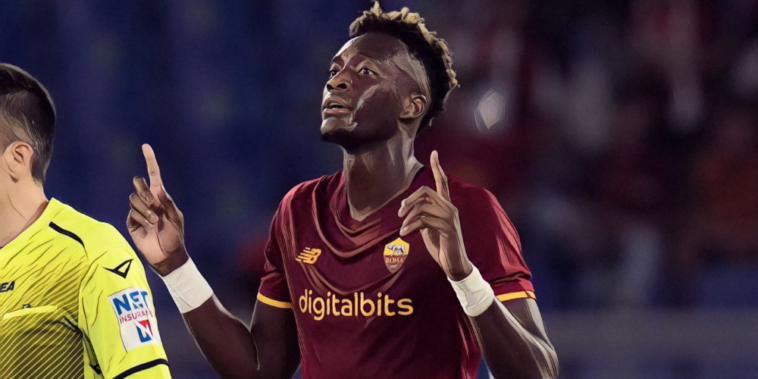 Tammy Abraham has discussed his decision to leave Chelsea and how he has learned so much during his short time working under Jose Mourinho at Roma.

Abraham signed for Roma in a £34m deal during the summer after a frustrating spell at Chelsea, falling out of favour following the arrival of Thomas Tuchel as head coach before being left out of the squad for the Champions League final win over Manchester City.

The 23-year-old had featured regularly under predecessor Frank Lampard and finished as the club’s leading scorer in each of the past two campaigns, but failed to convince Tuchel before deciding to leave the west Londoners in search of regular first-team football.

Abraham has discussed his decision to leave the club where he came through the academy ranks and says it was important he found somewhere he would feature prominently.

“I think the easy option would’ve been to stick around and sit down,” Abraham said, as per Sky Sports.

“Chelsea’s a massive club, they will compete and try to win trophies so the easy option would’ve been to do that.

“I realised that I needed to go out and prove myself, I needed to play some games. I took a decision and it was the right one.

“I think at first it’s quite tough to deal with. You’ve gone from playing regularly to not being in the mix and not even making the bench sometimes. I got to a point where I had to sit down and talk to myself. I was going out to train and I was doing it for me.

“I was going to train to better myself because it’s easy to throw a strop, to be angry around the place, to be a bad egg.

“For me, it was the opposite. I learned about myself and I think that strengthened my mindset. I was with the team whenever they needed me.

“Players like Mason (Mount), Reece James, Callum Hudson-Odoi – the players that are younger than me, I kind of had to lift them and be their support, help them and encourage them.

“At the end of the day, we won trophies as a team so I have to thank them for that.”

Abraham has scored four goals in 10 appearances since signing for Roma, with his performances having earned him a recall to the England squad ahead of this month’s World Cup qualifiers against Andorra and Hungary.

Tammy Abraham has been called into the England squad for the first time since November 2020 👏 pic.twitter.com/SG0fw7kyoR

The forward has spoken on his desire to accept a new challenge, admitting the presence of Jose Mourinho was a major factor in his decision to leave the Premier League.

“Why Italy? Good question. I had different options. So many clubs I was speaking to at the time. Italy came and I spoke to Jose. He had a goal.

Abraham has opened up on his first conversation with Mourinho regarding the move and believes he has already learned ‘so much’ after a change of environment and competition.

“The first thing he said to me was when I picked up the phone he was like ‘do you want to enjoy some sun or stay in the rain?’ I laughed,” he said.

“I think at first I did not think much of it when we were speaking. I think my mindset was that I wanted to be in the Premier League and I wanted to stay here.

“I feel like it was home, being around London, being around England. It was home. And I think I had to open my wings a bit and make a choice and I chose Italy and would not change it.

“I have learned so much tactically – as much as I have in my entire lifetime. It is good. You need to learn off different managers. Right now I am learning a lot.”