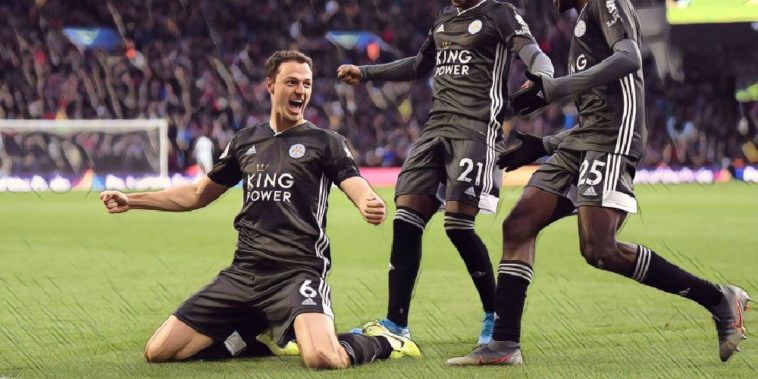 While expectations were high coming into the 2019/20 season, Leicester City have shocked many with the quality of their performances and have cemented themselves as viable title contenders this season.

Brendan Rodgers has implemented an exciting, attacking style of football that has maximized his young squad and given the club a sense of identity for the first time since their dramatic title-winning season.

During that season Leicester developed an infamous style of play, centred around the ball-winning ability of N’golo Kante, the long passing of Danny Drinkwater, and the pace and movement of Riyad Mahrez and Jamie Vardy. From a compact, deep-sitting 4-4-2, Leicester would explode on the counter, devastating teams with the speed and directness of their attacks.

Yet in the absence of key players such as Kante, Drinkwater, and Mahrez, persisting with such a style made little sense for the club. Their player recruitment indicated that rather than seeking to recreate that title-winning team, the club would try and adopt a new tactical identity.

While Claude Puel attempted to conduct such a tactical transition, in Rodgers, Leicester have found a coach better suited to the squad and rooted in a clearer tactical philosophy. It has enabled the team to be successful once again, albeit in a very different way.

Rodgers sets his team up in a 4-1-4-1, a system that is both conducive to his preferred possession-based style of football and the specific qualities of his players.

In Wilfred Ndidi, Leicester have one of the best defensive midfielders in the Premier League. He averages 4.6 tackles and 2.9 interceptions per 90, placing him among Europe’s elite in terms of ball-winning. When combined with his positional awareness, reading of the game, and physical attributes, Ndidi is no doubt one of the most well-rounded defensive midfielders in England.

His strengths are not limited to the defensive phase either. Ndidi plays a crucial role in build-up play, sitting ahead of the centre-backs to provide a passing option before moving the ball through short passes to the more advanced midfielders or fullbacks. His composure and accuracy with these passes enable the rest of the team to push further forward, thus making the team’s attacks more potent. Ndidi is tasked with tremendous responsibility as a single pivot in a 4-1-4-1, but luckily for Leicester, he has the necessary attributes to execute the role to great effect.

Sitting ahead of Ndidi in the 4-1-4-1 are Youri Tielemans and James Maddison, who have both shone for Leicester this season. With their defensive duties taken care of by Ndidi, they are free to take up positions in between the lines and dictate Leicesters attacks in the final third.

While both are effective creative presences, with Maddison and Tielemans averaging 2.5 and 1.6 key passes per game respectively, they are more than stereotypical playmakers. They both pose goal-scoring threats and are dangerous from range and Maddison, in particular, offers another string to the Foxes attacking bow with his superb dead-ball ability.

Despite nominally playing the same position, Tielemans and Maddison have significant differences in their playing style. Maddison’s 2.2 successful dribbles per game far eclipses Tielemans’ 0.6 and is just one indication of the Englishman’s tendency to attempt to create space for himself and others through his on-ball presence.

By contrast, Tielemans is more active off the ball and tends to look to make intelligent runs to drag opposition defenses out of shape in order to create space for teammates. Both are also active defensively, engaging in Leicester’s press and falling back into deeper positions when necessary. Their combination of dynamism, creativity, and work rate makes them an effective attacking midfield duo.

Perhaps the most pivotal role in Rodger’s 4-1-4-1 is the full-backs. In Ben Chilwell and Ricardo Pereira, Leicester have two excellent, well-rounded full-backs who are instrumental in their attacking productivity and defensive solidity.

Rodgers encourages his fullbacks to push high and wide whilst in possession in order to stretch the opposition defence, allowing the wingers to tuck inside, pose as an option for diagonal switch passes, and facilitate the creation of overloads out wide. These overloads enable Leicester to progress possession effectively as the quick interchanges of passing create space for attackers to exploit.

In Chilwell and Pereira, Rodgers has two excellent players who are capable of fulfilling these various responsibilities. Chilwell is an excellent passer, and his crossing, ability to switch the play, and delicate chipped or lofted passes make him a versatile attacking force for Leicester.

This ball-carrying capacity allows him to be in space to create cutbacks for onrushing midfielders or create space for Ayoze Perez, who usually partners him on the right-hand side. Defensively, both Chilwell and Pereira can be susceptible to being caught out due to the advanced positions they take up.

With diverse attacking abilities and well-rounded defensive skills, Chilwell and Pereira have been more than capable of fulfilling their multitude of responsibilities in the fullback role.

Upfront, Jamie Vardy has been perhaps the biggest beneficiary of Rodgers’s arrival. He’s scored 16 goals this season, five more than the next best Tammy Abraham in the Premier League. Rodgers recently revealed that he has instructed Vardy to play less of a role in Leicester press, perhaps an indication that Northern Irishman is aware that the 32-year old’s energy needs to be preserved as much as possible if he is to sustain his goal-scoring form.

However, Vardy is getting more touches in the box and crucially is scoring more goals under Rodgers than under Puel. His lethal combination of exceptional movement, clinical finishing, and searing pace continues to devastate Premier League defences.

He is often the benefactor of through-balls and well-worked crosses, both of which are key tenets of Rodger’s attacking play. With a dynamic attacking set up around him, Vardy is once again showing the Premier League that he is one of the most prolific and underrated strikers in the country.

Perhaps one of the most surprising elements of Leicester’s season thus far has been their defensive solidity. With the sale of Harry Maguire and the implementation of such an aggressive attacking style, one would think that Leicester may have struggled to keep goals out this season.

Yet the development of Caglar Soyuncu has been one of the most impressive and important aspects of Rodgers’ impact at the club. The Turkish international is both an excellent ball-player and a physical presence defensively, and with the composed and experienced Jonny Evans alongside him, he has matured into an excellent and complete centre-back.

With Ndidi shielding them and the reliable Kasper Schmeichel behind them, Soyuncu and Evans have been the spine that has served as the platform for Leicester’s attacks and the focal point of their defensive unit.

With the likes of Perez and Harvey Barnes excelling as tricky, pacy wingers, Rodgers has utilized a tactical system that maximizes the abilities of his players within the possession-based, attacking philosophy he has implemented. It speaks to his intelligence as a coach and the excellence of Leicester’s recruitment that the squad is so well-suited to Rodger’s ideology.

His track record of youth development has also made a clear impact on the squad, as he has been able to improve the performances of a previously talented yet inconsistent group of young players.

Along with instilling a clear philosophy that suits the team, Rodgers has also been able to give his side a level of strength and depth that they previously did not have by improving the performances of various members of the squad.

In Demarai Gray, Hamza Choudhury, James Justin, Christian Fuchs, and Kelechi Iheanacho, Rodgers has been able to extract high-level performances from players despite their lack of game time. It’s another testament to the phenomenal job Rodgers has done at the club, and it may prove vital if Leicester are able to maintain their unexpected title charge.

Full of flair, youth, and energy, Rodgers has created an exuberant attacking side that has maximized his talented squad and produced sensational and consistent results for his team. Perhaps most exciting of all, he has made it possible for Leicester City to dream of repeating their fairytale season once again.