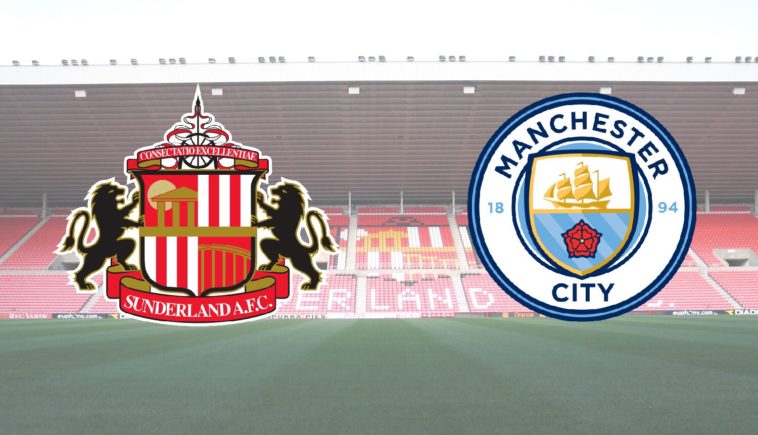 Sunderland host an in form Manchester City side at the Stadium of Light on Sunday.  Sunderland lost 2-0 at Goodison Park last week in an underwhelming performance. City however, thrashed Championship high flyers Huddersfield Town 5-1 at the Etihad Stadium in the FA Cup replay midweek.

In his pre-match conference, Sunderland boss David Moyes said “Kirchhoff is on the road to recovery but it’ll be unlikely for him to feature”. Sunderland are without Lee Cattermole and Steven Pienaar, whilst Jack Rodwell has been “in and out of training”.

Sunderland will more than likely set up with a 5 a the back formation like the Wearsiders did against Liverpool and Tottenham, Moyes confirmed a similar setup is likely when asked by a reporter. There are no fresh injury concers for the Black Cats.

Sunderland will have Senegalese centre half Papy Djilobodji available after a 4 match suspension. Despite some fans will say he’s a liability, Djilobodji may start as Belgian regular Jason Denayer is ineligible against his parent club.

Manchester City meanwhile are still be without Brazilian striker Gabriel Jesus. However, Sergio Aguero is fit and has been branded the “danger man” by Moyes.

Midweek Aguero certainty showed his capabilities as well as winger Leroy Sane who’ll be a threat for the Sunderland back line. City will still be without Vincent Kompany and Ilkay Gundogan who both have long term injuries. Yaya Toure and Alexander Kolarov were both rested against Huddersfield midweek but are expected to feature in Pep Guardiola’s starting 11.

These two sides met at the start of the season with City coming out 2-1 victors thanks to a late Paddy McNair own goal. Sunderland looked good that day in Moyes’ first game in charge.

The last meeting at the Stadium of Light ended with a 1-0 win for the visitors thanks to Sergio Aguero’s only goal of the game.

Sunderland have a reputation for winning 1-0 on Wearside against City, with the Black Cats winning by this score line for 4 seasons in a row. In 2010/11 season a late Darren Bent penalty won all 3 points after Andy Reid was tripped, the following season Martin O’Neill’s side won due to a late offside goal by South Korean international Ji-Dong Won. Again on Boxing Day a 53rd minute Adam Johnson strike won the game, the season following saw Phil Bardsley’s strike after 21 minutes be the difference. That same season saw City beat Sunderland 3-1 at Wembley in the League Cup final. The last two league visits to Wearside have been more promising from a City point of view, a 4-1 win and a 1-0 victory have made sure all 3 points went to Manchester.