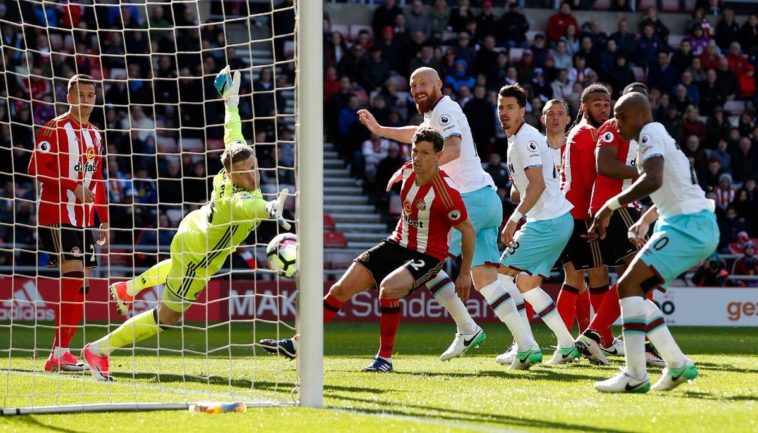 A 2-2 stalemate at the Stadium of Light means Sunderland are probably going down, while West Ham are probably safe.

Both teams wanted the three points, but in the end a share of the spoils was good enough for the Hammers to move up the Premier League table to 13th with 33 points. For Sunderland, on the other hand, a point was never going to be enough, and they stay bottom of the league with 21 points, nine adrift of Hull City in 17th.

The Hammers started the game brightly and took the lead after only five minutes. A miss-hit volley by Andy Carroll landed fortuitously at the feet of Andre Ayew, who calmly slotted the ball home from inside the penalty box.

The next twenty minutes saw Sunderland trying to get an equaliser, while the Hammers seemed content to sit back and hang on to their slender lead.

On 26 minutes Sunderland finally scored a goal, their first in more than 11 hours of play. Wahbi Khazri’s corner flew straight into the West Ham net, although the Hammers will be upset that the referee chose not to disallow the goal as keeper Darren Randolph was clearly fouled by Victor Anchebe.

West Ham immediately retook the lead in the early stages of the second half when defender James Collins headed home a Robert Snodgrass corner in the 47th minute.

Having gone in front once again, the Hammers frustrated their fans by sitting back and trying to hang on for a narrow win.

Unfortunately, this is something they have not been able to do all season, and conceding late goals has become a speciality.

Consequently it was no surprise that on 90 minutes, the equaliser duly arrived. Fabio Borini swept the ball home from the edge of the box after Randolph had spilt the ball, having failed to collect a high ball.

Ten minutes of added time was necessary, due to an injury to Sunderland’s Billy Jones. In this period, West Ham’s Sam Byram was sent off, after he unluckily got a second yellow card.

With West Ham reduced to ten men and plenty of added time to play, Sunderland were unable to press home the advantage and the game petered out to a draw.

Time and games are running out for the Wearsiders. Their next game is another must win match against local rivals and fellow relegation candidates Middlesbrough.

West Ham welcome Everton to the London Stadium next Saturday, before a visit to Stoke a week later.