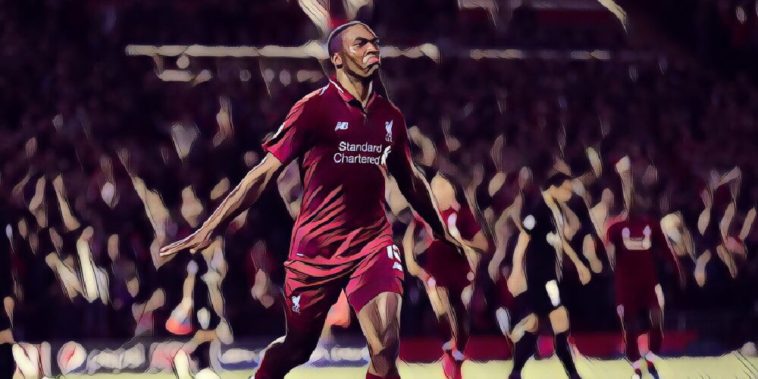 Football can be a cruel game. Plenty of fans have plenty to gripe about and often the players bare the brunt of supporter’s rage when things aren’t going well.

The players are regularly dismissed as overpaid, mercenaries who only care about their image rights and Instagram accounts. Daniel Sturridge has been no exception to this, also being accused of laziness and a lack of commitment by some Liverpool fans over the years as he has grappled with set back after set back.

Sturridge is a fascinating example of a player outcast by some of his own supporters. Their rejection of the former Chelsea forward is largely down to the the sheer number of injuries he has sustained during his time at the club.

The England International has sustained no fewer than fourteen injuries since joining The Reds in 2013. A ridiculous number and you could forgive some fans for writing him off altogether.

To do that though is to dismiss a wonderfully talented player, who on his day, is arguably the most naturally skillful English forward in the Premier League.

His day however, was becoming less and less regular at Anfield and it appeared all but over for him during the last transfer window. Rumours were abound that Sturridge was off to Turkey; the retirement league of Europe. It seemed a sad and unsatisfactory conclusion for such a good footballer.

But football is also a weird and wonderful game and clearly had other ideas when it came to Sturridge’s departure from Anfield. A good run in pre-season gave Jurgen Klopp a gentle reminder of just how good a player was on his books and as that early August deadline came and went, he was still a Liverpool player with the new season on the horizon. The Super Lig had missed out!

It’s fair to say that Sturridge is very lucky indeed to still be at such a top club, playing at such a high level, but then again, he is long overdue a bit of good fortune. 2017-18 was easily his worst season as a professional, featuring just fourteen times for Liverpool and scoring just three times. Throw in a miserable loan spell at West Brom and a failure to even make it into contention for the World Cup and things looked pretty horrific for his prospects.

Somehow he has hung on to his Liverpool career and by the skin of his teeth he is still at the club and starting to hint at the most unlikely of revivals. As above, his talent and ability have never come in to question from any fair minded fan or pundit, it was his ability to withstand a congested fixture list and come out available on the other side that was in serious doubt.

However, Sturridge playing the majority of games is simply no longer a requirement for this campaign as Liverpool’s squad depth is such that he can now be nursed through a season. It looks as though the Reds have gained a very useful impact player for their squad without dipping into the transfer market.

His days of playing ninety minutes are clearly numbered, but off the bench against tiring legs, his quick feet and eye for goal could be a really useful asset.

Against PSG he led the line very well, despite running out of gas in the second-half. He took his header superbly and looked hungry for the ball throughout. He’s also off the mark in the Premier League and Klopp has said he’s in the “best shape” he’s been in for three years.

With so much riding on this season for Klopp’s men, a player like Sturridge in the ranks, fit and ready to share the load could make a huge difference. The injuries will not have gone away, but there is finally something positive for Sturridge after years in the wilderness, with a new contract to play for, he could well avoid the retirement home after all.