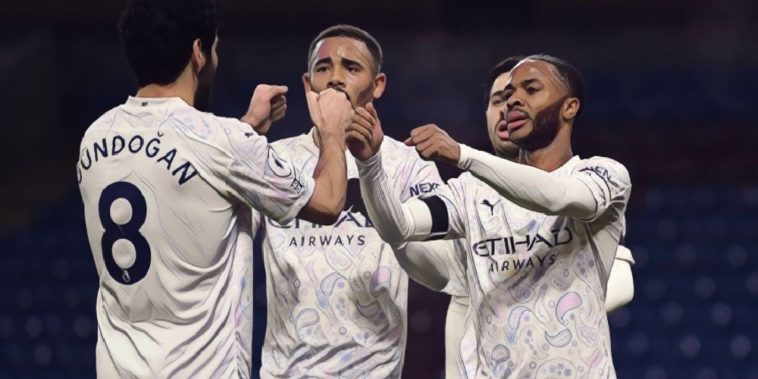 Manchester City restored their three-point lead at the top of the Premier League with an excellent performance to earn a 2-0 win over Burnley.

It didn’t take Man City long to get themselves in front, a Bernardo Silva effort being kept out by Nick Pope, though the England international only palmed his save into the path of Gabriel Jesus who produced a diving header to open the scoring after just three minutes.

City played some excellent football right from the off, and after 38 minutes they doubled their lead, Riyad Mahrez playing a wonderfully weighted ball down the right channel into Ilkay Gundogan before the German drilled a low, first-time cross into the box which was duly finished off by Raheem Sterling from a couple of yards.

Burnley ‘keeper Pope was forced into a couple of saves early in the second half, while Riyad Mahrez saw a goal ruled out for a tight offside approaching the hour mark as Pep Guardiola’s side looked to add to their tally.

They were also denied what looked like a potential penalty as James Tarkowski clipped Gabriel Jesus in the box, though Martin Atkinson nor VAR felt it was a challenge worthy of a spot-kick.

However, City really were excellent in every department of the pitch, preventing the Clarets from getting a single shot on target as they maintained their superb recent defensive record.

“It’s good to get another win and keep a clean sheet. We’ve been on a good run and we need to continue that,” Sterling told BT Sport.

“It’s always good to get the first goal as quick as possible then you can work your way into the game.

“We know exactly what Burnley will bring to the game, physical, second balls and challenges, getting the ball into our box.

“It was a great ball from Ilkay Gundogan and I just had to be there to put it in.”

The result means City have now won their last nine Premier League game, the east Manchester side having recovered from a difficult start to the season, and Sterling was clear as to what was behind their upturn in form: “Togetherness,” he said. “It’s about grinding results out week by week. The more you win, the better you feel.”

Next up for the Premier League leaders is a hugely mouthwatering fixture against reigning champions Liverpool at Anfield at the weekend.