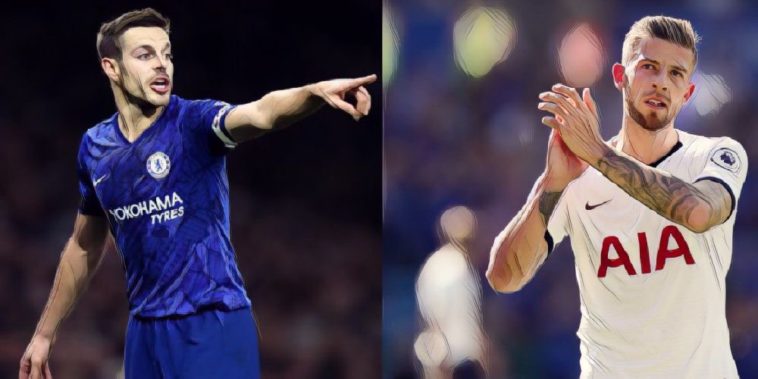 Chelsea’s Cesar Azpilicueta and Tottenham’s Toby Alderweireld have reacted strongly following the racist incident which marred the clash between the two sides this weekend.

A London derby that often seemed to be on the verge of spilling over saw Chelsea claim a vital 2-0 away victory at the Tottenham Hotspur stadium, Willian scoring twice in the first half to secure a huge result in the race to secure Champions League qualification.

However, on what was an otherwise positive evening for Frank Lampard’s side, the game was marred by allegations of racist abuse towards defender Antonio Rudiger, the Germany international indicating he had received monkey gestures from sections of the Tottenham support, the latest dark incident involving racism for English football.

The incident follows racist abuse suffered by Manchester United midfielder Fred in the Manchester derby earlier this month and is now being investigated by London’s Metropolitan Police, and players from both sides have now moved to condemn the disgusting behaviour of sections of the home crowd.

Speaking on the incident, Chelsea captain Azpilicueta said: “It is made very clear to us all that if we have heard any racist incident to report it. Tony came to me and told me he was listening to racist songs towards him so I reported it to the referee. We are very concerned and aware of this behaviour.

“Altogether we need to make it stop. I hope everything gets clear and we eradicate it as soon as possible. It‘s an issue not just in football but in life.”

Tottenham’s Alderweireld was in full agreement that racism has no part in football, or indeed within society, and hopes the authorities identify and deal with the culprits quickly as the Premier League looks to end incidents of racial abuse.

He said: “I did not know on the pitch what was happening but obviously after the game we heard more about it. It does not belong in football, I hope they find the individuals quickly because it is not good and we are all sick of it.”