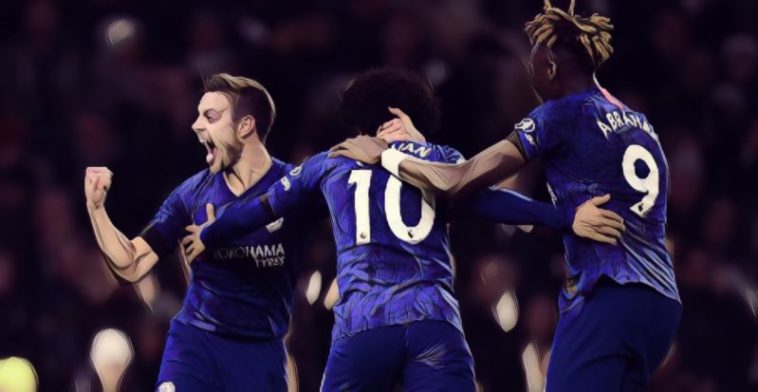 Chelsea inflicted a damaging blow on Tottenham’s top four hopes after an eventful and often bad tempered clash between the two city rivals on Sunday.

Chelsea started with far more impetus and guile than their hosts and were deservedly two goals up at half time before Spurs could muster a response.

The second half only got worse for the hosts after VAR ruled a petulant kick out on Antonio Rudiger by Son Heung-Min was deemed worthy of a straight red.

The game fizzled out from there as Chelsea put in an impressive shift to secure all three points. Here’s a look at how the two sides rated after a potentially massive result in the race for Champions League Qualification.

His grave error on the brink of the half time saw him swing a foot dangerously high at an onrushing Marcos Alonso to concede a penalty, courtesy of a VAR check.

The Ivorian was given a torrid time by Willian in the first half and was beaten far too easily for the opening goal. He looked shaky and unsettled for the remainder of the game despite some forays forward.

The Colombian was not really at fault for anything on the night for Spurs, but the home fans will be disappointed by another unconvincing display from the 23-year-old.

The Belgian was a touch better than most of his defensive colleagues and put in a few stoic tackles to keep the scoreline respectable, particularly to block Reece James from adding a third late on in proceedings.

A bit like Sanchez, Spurs fans will feel a bit aggrieved by the experienced Belgian’s defensive display. He was far from woeful but part of the collective flat-footed Spurs backline that wilted in the face of Chelsea’s aggressive running in the first half.

The England international failed to stamp any influence at all in a timid first-half display that saw him hooked by the manager. Poor all round.

Lot’s of industry and running around but too many safe passes and not enough impetus for a player of his experience. Another one for whom the game seemed to pass by entirely.

Looked to try and get forward in possession and use his pace but he was strangled by the ineffectiveness of his colleagues behind him and barely got a look in during a dull first half.

Did better than most of this teammates as he looked to get forward and support Kane with some clever runs and won a free kick with a dangerous dart forward late on.

The South Korean is so often the star in big matches like this but he made the headlines for all the wrong reasons in this match after he saw red in the second half for a stupid kick out on Antonio Rudiger. After a lengthy look from VAR the winger was dismissed and left his side with a mountain to climb

Given he was totally starved of service, the centre-forward did all he could to try and feed off the scraps that came his way. He skied an effort in the first half but looked lively in the box whenever Spurs tried to get a ball into him.

The Dane was poor after coming on to try and inject a bit more creativity at half time. His radar was all wrong and his distribution was dire for a player of his obvious quality.

Could do little to change the shape of the match after coming on but was solid enough at left wing-back.

Another player who did little wrong but ultimately failed to make any impact on proceedings from Spurs’ static and toothless midfield.

Solid between the sticks for his side and his handing looked tidy all afternoon for Chelsea.

The Germany international put in an excellent shift for his side. He was calm and composed on the ball and won his duels early on to set the tone for proceedings. He was a little dramatic in the red card incident though to be honest.

Almost mirrored his defensive partner on the night. A very steady shift from the towering Frenchman whose concentration and timing were spot on, which was in start contrast to recent weeks.

The youngster was full of fight, pace and energy at the back, the polar opposite of anyone in the Spurs backline. Did his defensive duties with professionalism and did not look at all out of place in such a big match.

The experienced Spaniard put in yet another top drawer display. He got forward well on the overlap and worked ever so hard to cover his flank all game.

The defensive midfielder covered so much ground as he always does for Chelsea. Won several loose balls and pressed well all night. Some of his passing on the counter was poor though as he twice slowed down what could have be a killer counter-attack from Chelsea against tiring legs.

Another player who put in a solid shift full of energy and graft. He carried the ball well and looked to move possession with the required zip to help keep Spurs on the back foot.

Bombed forward well on the night and won the crucial penalty for his side. Left his flank a bit more exposed at times though in the first half.

Another impressive display from the young playmaker. He looked at ease on the ball and played some lovely diagonal balls as he ruthlessly exposed the space in behind Spurs’ flat-footed defensive lines

A real classy display from the veteran Brazilian. He took his opening goal so well, albeit with the luxury of time and space afforded to him by Aurier. He grew into proceedings from there and pulled the strings of Chelsea’s attacking play all night. Slotted home his penalty with aplomb to round off a man of the match display.

Led the line well for the visitors and had the ball in the back of the net early in the second half only to see a correct offside flag rule his effort out. Some of his touches in the box were sloppy though but his energy levels were excellent all night.

Decent cameo – probably should have made it three nil but saw his effort charged down.

Kept the ball neatly and used his experience so well to keep his side in control against 10 men.

Not much impact from the Belgian though he did go close with a decent drilled shot late on in the game.