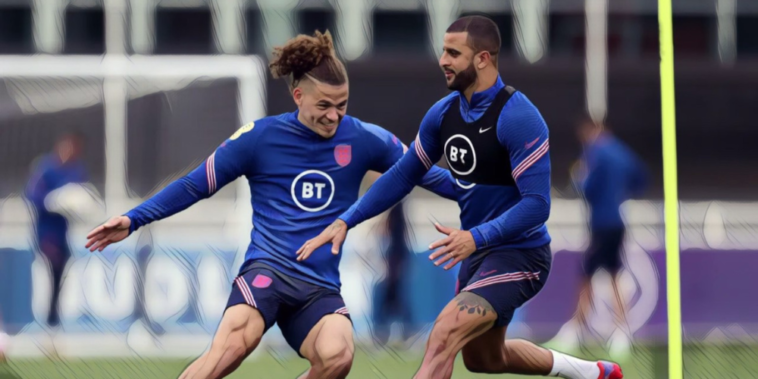 Gareth Southgate insists the inclusions of Kyle Walker and Kalvin Phillips in England’s World Cup squad are risks worth taking for his side.

Walker and Phillips have been named in the Three Lions’ 26-man squad for the tournament in Qatar, despite both appearing doubts to feature. Walker has not played since being substituted during Manchester City’s derby win over Manchester United in October, while club teammate Phillips has struggled for fitness this season.

The latter made his return during City’s 2-0 win over Chelsea on Wednesday evening, but has featured for just 54 minutes in all competitions this season due to shoulder surgery.

Southgate has opened up on his decision to include the duo – both of who were integral to England’s run to the final of Euro 2020 – and insists it is a risk worth taking.

“Kalvin played last night so I think with him, he is free of injury,” Southgate told a press conference.

“We are aware that he’s not going to be able to play seven 90 minutes. That won’t be possible. We are going to have to build his fitness level, but he is available, free of injury and we don’t really have a lot of cover for that role in the country.

“Kalvin is a super player, and we feel that is a risk worth taking.

“Kyle’s a little bit different because he’s not back in full training yet, but he’s going to be available before the end of the group stage.

“Of course, we had to make a really difficult call with Reece James, who we think is a fantastic player, but he wasn’t going to be available, if everything went perfectly, until the latter stages of the tournament.

“There were too many unknowns for us on that road to recovery and also, I don’t think we can take a player who is unavailable for the group stages. That would be deemed arrogant in some circles.

“It was a tough call, but Kyle is a long way ahead of that. He’s progressing really well.”