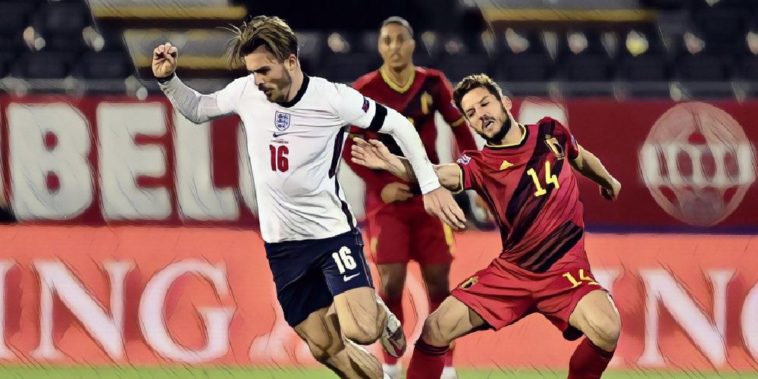 Gareth Southgate has hailed the ‘bravery’ of Jack Grealish and described the midfielder’s performance as ‘outstanding’ despite England’s Nations League defeat to Belgium.

England’s hopes of qualifying for a second successive Nations League finals were ended following a 2-0 defeat to the world’s number one ranked side in Leuven, a deflected effort from Youri Tielemans and a Dries Mertens free-kick sealing three points for Belgium.

Southgate’s side had the majority of the possession but struggled to create clear-cut chances, Harry Kane’s header – cleared off the line by Romelu Lukaku – the closest the visitors came to scoring.

Despite the defeat, Southgate was full of praise for the ‘outstanding’ performance of Aston Villa captain Grealish, who followed impressive showings against Wales and Ireland with another encouraging display on his first competitive start at international level.

“I knew I would see someone with bravery to play,” Southgate said at his post-match press conference.

“I think we took the ball in tight areas. His technique was good, he took players out of the game. He bought a lot of free-kicks.

Another MOTM showing in an England shirt. pic.twitter.com/fjoENvoWNw

“I thought he was outstanding, he should be delighted with the way he played.

“Firstly, as a person, since he’s come into the camp, he’s impressed us with his approach. He’s been curious to find out what we’re looking for from him.

“He’s taken that on board with his performances in training and he transferred his club performances into international football tonight against a top-level opponent. So we couldn’t have been happier with what he did he should be really proud of his performance and, as I say, he really stood up against as tough an opposition as you’re going to face.”

Grealish’s performances have followed an increasing clamour for his regular inclusion at international level, with the 25-year-old having enjoyed a superb start to the Premier League season, scoring four goals and providing five assists in just seven league appearances.

The creative midfielder took his chance amid the absences of the injured Marcus Rashford and Raheem Sterling, and Southgate admits the star’s showings have done him no harm when asked if Grealish has moved himself up the England pecking order.

“Yeah 100 per cent,” the Three Lions boss said. “I sort of explained to him what we wanted to see from him when he came in in September.

“I think he’s been a helpful addition to the group, he shows he wants to play, the players have a good understanding. Today was a great game for us to see him and see the level and I couldn’t speak highly enough of his performances.”