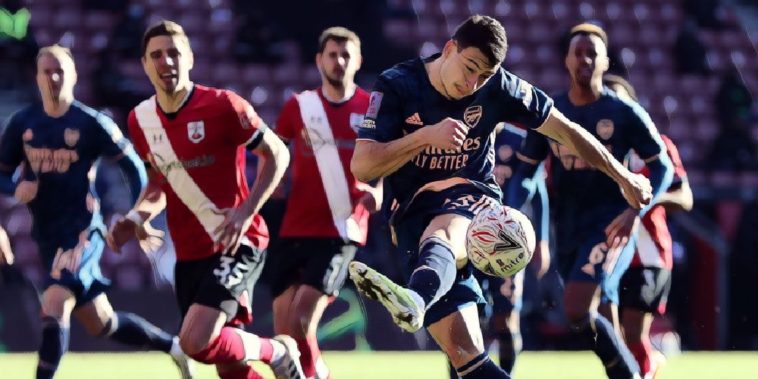 Southampton host Arsenal on Tuesday evening, the hosts hoping for a repeat of their FA Cup victory over the Gunners at the weekend.

Here’s all you need to know about that meeting at St. Mary’s:

The Saints will go into the match full of confidence after Saturday’s win, as they moved into the fifth round of the competition at the expense of the FA Cup holders.

The game saw a strong Southampton line up dominate a much-changed Gunners side, with an own-goal from returning defender Gabriel midway through the first half enough to hand Ralph Hasenhuttl’s side victory.

That result is just another marker of the improvements that the Austrian’s side have made over the past year or so, the Saints currently in 10th place in the Premier League, though they are only five points behind fourth-placed Liverpool, and have a game in hand on the struggling champions.

Southampton’s last league fixture saw them overpowered by an in-form Leicester City side at the King Power, with goals from James Maddison and Harvey Barnes enough to hand Brendan Rodgers side all three points.

The week has also seen rumours of a potential exit for star striker Danny Ings in the near future, with the former Liverpool man reportedly snubbing contract talks in the hope of potentially joining a Champions League club in the summer.

As for team news, Hasenhuttel will likely field a similar team to the one that played on Saturday, although Alex McCarthy will could return after missing the last few games due to a positive Covid-19 test.

After an improved run of form from Arsenal, it will have been something of a blow to have suffered an early exit from the FA Cup, with boss Mikel Arteta potentially left ruing his decision to make a number of changes for their fourth-round tie with the Saints.

After being kept out of the side in recent weeks, the likes of Willian and Nicolas Pepe were both handed starts, yet neither man could really make an impact as the visitors struggled to really get a foothold in the game.

The former Chelsea man, in particular, has been a real disappoint since making the move to the Emirates in the summer and is already beginning to look like an expensive problem for his new side.

The North London club have only just this week managed to rid themselves of controversial playmaker Mesut Ozil, with the former Germany international’s long-running saga finally coming to an end after the club agreed to terminate his contract six months early.

The 32-year-old has now completed a move to Turkish giants Fenerbache, bringing an end to what has been a turbulent final few seasons at the club, in which he’s struggled for game time under a succession of managers.

The club already appear to have their eye on a replacement, however, with Real Madrid youngster Martin Odegaard rumoured to be joining on-loan after failing to work his way into Zinedine Zidane’s plans at the Bernabeu.

Meanwhile, Emile Smith Rowe and Pierre-Emerick Aubameyang are set to come back into the side after missing Saturday’s defeat.

The two sides drew 1-1 earlier this season in the league, although their latest clash saw the Saints claim victory in the FA Cup.

In truth, the home side were by far the better team for much of the match and were duly rewarded for their efforts with a somewhat fortuitous goal midway through the first half, as Gunners defender Gabriel turned a Kyle Walker-Peters driven effort into his own net.

Despite a late flurry of attacks from Arteta’s men, they never really looked like threatening, while Southampton were perhaps unlucky not to be awarded a late penalty after Shane Long was tripped inside the box.

Read – FA Cup Fourth Round Team of the Week