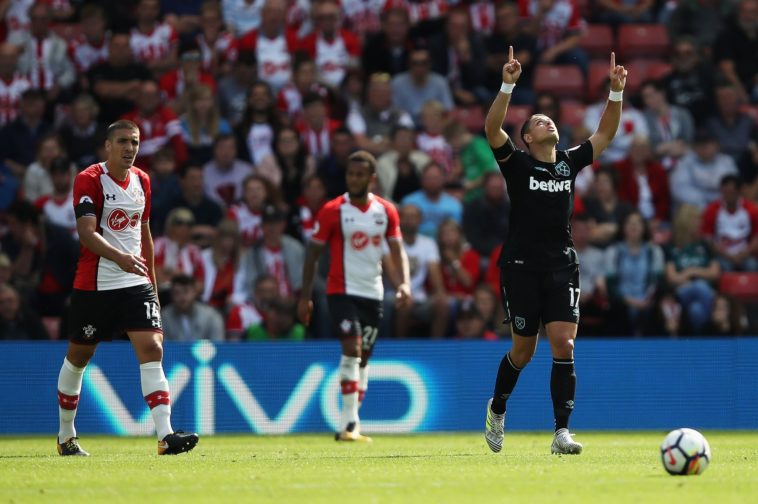 After conceding to early goals and having Marko Arnautovic, sent off, West Ham fought back with Javier Hernandez scoring two goals either side of the break.

Here are five things we learned

Too many late goals

West Ham continues to concede too many late goals and lack the tactical awareness to hold on to draws away from home. Last season the Hammers’ defensive frailties were evident, especially during the opening months of the season. This term, those very same faults are back again and Slaven Bilic’s side are consequently letting in too many goals, seven in two games so far this season.

Conceding two penalties in any match should be viewed as a disaster and West Ham’s defeat yesterday can be blamed on these defensive blunders. The 93rd minute penalty, which ultimately won the game for the Saints was harshly given against Pablo Zabaleta. Top teams don’t let the opposition have these chances and West Ham have a lot of defensive work to do this coming week at the training ground.

The Saints can score at home

Prior to playing West Ham, Southampton had not scored at home since 5 April, which amounted to 576 minutes of football.

Having had 29 shots against Swansea last week, in their goalless draw, there was a collective sigh of relief yesterday around St Mary’s when Gabbidani slotted home after Nathan Redmond’s through ball.

Although the Saints were only able to score from open play once during the match, Gabbiadini and Redmond both went close with long-range efforts.

West Ham’s long search for a regular goal-scorer looks like it has finally ended. Javier Hernandez, the former Manchester United striker, signed from Bayer Leverkusen this summer, has so far this season been one of the few bright spots for West Ham.

Having toiled manfully last week against his former club, ultimately to no avail, his two goals yesterday – both scored from close range – will give Hammers fans confidence they have a player who can get 20 goals a season.

New signings yet to bed-in

The Hammers’ four summer signings all played yesterday and apart from Hernandez, they all disappointed.

Arnautovic was sent off in the 33rd minute for stupidly elbowing Jack Stephens in the neck. His contribution up to this point had been negligible, and after the match the Austrian international issued a statement apologising to the fans.

Zabaleta had a reasonably good game, but the late penalty he conceded, clouded his performance and lost the game for West Ham. Joe Hart was once again in goal and having let in seven goals in two games, he looks a little short on confidence. Better days are ahead for all of these players – hopefully.

Good start to the season for the Saints

Southampton have four points from two games and sit comfortably in fifth spot in the Premier League, as of Sunday morning.

Admittedly, both of their games have been at home so far, but a win and a draw is a good start to the season.