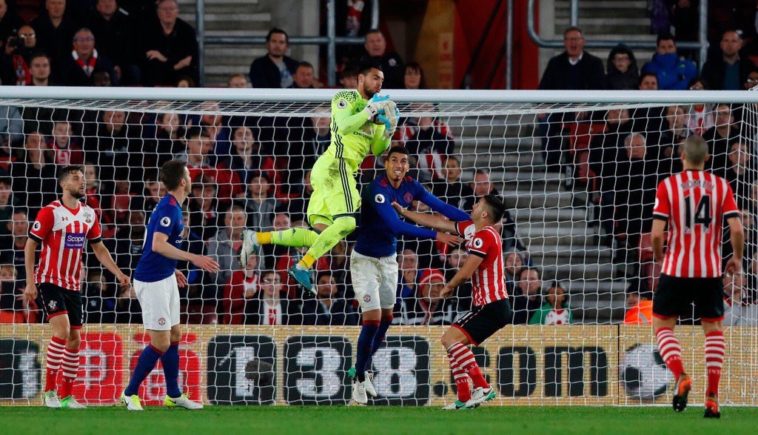 Southampton and Manchester United played out a dire low quality game that meant nothing to either side.

Jose Mourinho even went to say as much before the game had even started, which was disappointing in itself. That negativity does not help going into a game. It was United’s 15th league draw of the season, while Southampton haven’t scored at home in over six hours of football.

The game did however get off to a lively start. A stray Southampton ball was fired at Eric Bailly and it struck his hand, Mike Dean pointed to the spot and awarded Southampton a penalty. Manolo Gabiaddini stepped up to take but he hit a low tamely struck penalty and it was saved by Sergio Romero.

At the other end it was Bailly in the action again, he cut inside from the flank hitting a shot from the edge of the box but it was saved well by Fraser Forster. Mkhitaryan then found Wayne Rooney on the left hand side and on the turn found Martial through the middle but the Frenchman dragged his shot wide.

United had no width at all with the line-up set up defensively yet again and a real mishmash of players just thrown into the side. There was no cutting edge from either side with everything being played in front of the two defences. A truly torturous half of football, really disappointing from both teams.

Southampton started the second half the better team. A free kick to Southampton on the right of the United box was bent round the wall by Dusan Tadic but it was saved by Romero in the United goal.

It was Southampton who continued to make all the inroads in the second half. James Ward-Prowse unleashed a curling shot from the edge of the box, forcing Sergio Romero into a sensational full stretch save. That was the Argentine’s 6th save of the game at that point.

Mourinho’s men finally threatened when Anthony Martial drove forward with the ball in the middle and released a curling shot that struck the post.

Southampton looked the more likely side to grab a winner but the game did end goalless.

From a Manchester United point of view it was a pretty farcical performance. Everyone knows the Europa League final is the priority and the league gives nothing to United. However, for the integrity of the club and the league but also for the fans that have paid to go to Southampton to watch the team, it was a disgrace. Man Utd should at least try to entertain and have a go because that was unacceptable for a club like Manchester United, yet another bore draw for Mourinho. A very disappointing league season for Manchester United draws closer to its end.

A defence should be made of Southampton manager Claude Puel. The French manager has had his critics this season but in this game Southampton looked the most accomplished footballing side, very neat and tidy on the ball with a very good use of the width. Southampton do have a goal scoring problem but they outplayed Manchester United all over the pitch and that is testament to Puel considering the United line-up his team faced cost over 200 million.