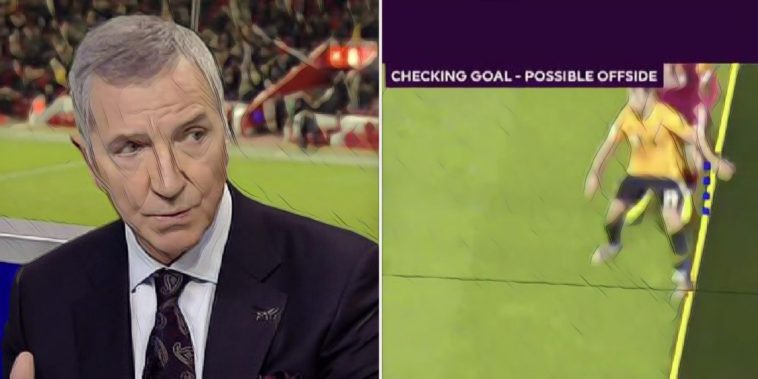 Graeme Souness has suggested a ‘simple’ solution to fix the offside rule following another weekend of VAR controversy within the Premier League.

Wolves were the latest side to feel aggrieved following a contentious call reviewed by the technology during their defeat to Liverpool yesterday, Jonny Otto adjudged offside by the tightest of margins in the build up to Pedro Neto’s disallowed equaliser.

The introduction of video assistant referees have seen decisions overturned by the smallest of details, interventions that have left Premier League fans exasperated by the influence of the technology on the spectacle of the game.

Sunday’s incident was the latest in a long line of similar situations involving the likes of Manchester City’s Raheem Sterling, Sheffield United’s John Lundstram and Liverpool’s Roberto Firmino earlier this season, and Souness has now called for changes to the offside law to solve the controversy.

Speaking on the incident following yesterday’s clash at Anfield, Souness believes a simple solution could help improve the spectacle of Premier League fixtures.

“It’s so tight, very hard to call. From my thinking, there’s a very simple way to get over this,” Souness said on Sky Sports.

“Instead of going down the road where any part of the attacking player is offside, any part of his body that he can score a goal with is offside.

“We are in the entertainment business. It’s why 99 per cent of people turn up to the stadium, to see goals. They see that as entertainment.

“We are denying them the pleasure of seeing goals and that’s what it is for everyone.

“We should change it to if any part of the striker is onside, so his foot could be behind that line but most of his body is beyond it, we should allow the goal to stand.

“It would take away a lot of the grey areas, not all of them, but the majority of them and we would see more goals.

“We cannot go on like this. There’s too much frustration.”