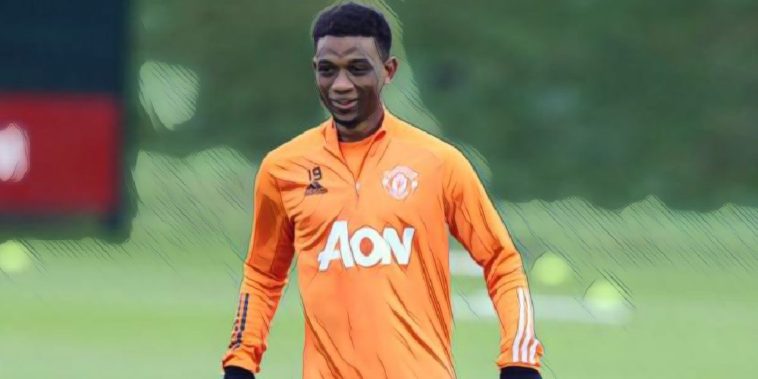 Ole Gunnar Solskjaer has discussed Amad Diallo’s initial impressions in training and says it won’t be ‘too long’ before the winger is handed his opportunity at Manchester United.

United completed the signing of the teenager earlier this month having initially agreed a deal with Atalanta during the summer, the Ivorian putting pen to paper on a long-term deal after finalising the formalities of a transfer which could reach up to £37 million.

Diallo has since joined up with the senior side for training and has impressed Solskjaer with his initial performances, with the Norwegian believing it is only a matter of time before the 18-year-old is involved in the first-team squad.

“Very good,” Solskjaer said at his pre-match press conference. “He can handle the ball. He’s enjoyed training and makes a difference in training, which is quite remarkable at his age.

“[He’ll need] some adjustment to settle into the hustle and bustle of the physical part of the Premier League. I can’t see it being too long until he’s in the squad.”

Atalanta had been keen to secure the services of the starlet on loan for the remainder of the season but United decided against sanctioning a temporary move, with Solskjaer indicating that the winger is likely to be involved ahead of a congested fixture list in the coming weeks.

Diallo was left out of the club’s U23’s side for their clash with Leicester on Monday night, and when asked if the youngster will be handed senior minutes in the coming weeks the Red Devils’ boss hinted at an imminent debut.

“It might be quicker than that, who knows?” Solskjaer said. “He’s definitely settled down well. The players have taken to him and he’s a very good character.

“[He’s] a very good, smiley boy who works really hard. He’s doing his sessions and getting used to us, of course. There’s always a period of adjustment needed, but he’s settled in well.”

United remain top of the Premier League following their goalless draw with Liverpool on Sunday, with the club returning to action when they travel to face Fulham at Craven Cottage tomorrow.