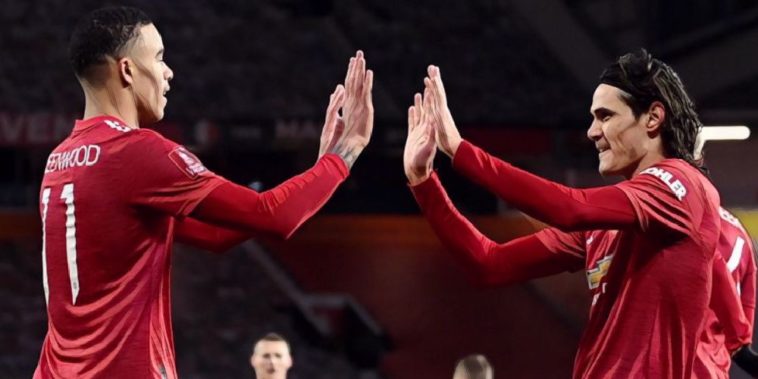 Ole Gunnar Solskjaer admits he is wary of a Roma comeback ahead of Manchester United’s Europa League semi-final second leg and has discussed the futures of Mason Greenwood and Edinson Cavani.

United travel to the Italian capital to face Roma tomorrow evening in possession of a 6-2 lead from the first leg in Manchester, the Red Devils overturning a half-time deficit in style to secure a commanding advantage.

The clash could see Mason Greenwood make his 100th appearance for the club, a fine achievement for a player who will not leave his teens until October.

Solskjaer has been discussing the progress of the academy graduate and his best position, admitting the in-form starlet will have to show greater bravery if he is to become a long-term option at centre-forward.

“The Liverpool game was going to be his 100th game and we spoke about getting the winner in that,” Solskjaer told his pre-match press conference.

“We’ve spoken about whether he’s going to be wide right, or be a No.9, because you’ve got to stick your head in there. He’s a pretty boy and I’m not sure if he’s going to do that.

“Keep doing what he does, he’s got a very bright future, I’m sure of that.”

The Norwegian also spoke on Edinson Cavani, who is yet to make a decision on whether to remain at the club beyond the summer amid reports of a desire to return to South America and interest from Boca Juniors.

The 34-year-old starred during the first leg with two goals and two assists and Solskjaer says he is hopeful of persuading the Uruguayan to commit his future for a further season.

“We’ve had some good chats lately and even though the decision is still in his court, I’m still hopeful.

“And maybe even more so when you saw him on Thursday against Rome, and telling him ‘when you do that in front of the Stretford End, that’s magic’.”

Despite the Red Devils’ significant advantage, Solskjaer is wary of the threat posed by Roma as his side bid to reach the final and end the campaign with silverware.

The United boss insists his side will head to the Stadio Olimpico with the intention of winning the game and has warned he has seen far ‘bigger upsets’ than the possibility of Roma turning around the tie.

“That’s the only way I think we can play this game. Of course there might be one or two changes in the selection, but we have to get into the final.

“Everyone says it’s done but I’ve seen bigger upsets than this. Roma beat Barcelona in a second leg after being 4-1 down.”