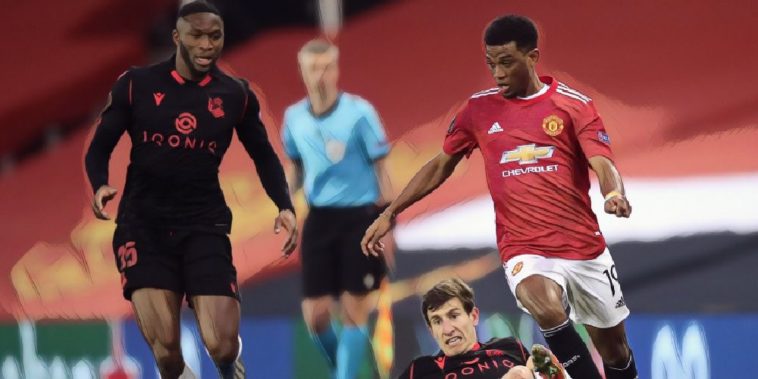 Manchester United cruised into the last 16 of the Europa League despite being held to a 0-0 draw with Real Sociedad at Old Trafford.

Manchester United came into the game with a healthy 4-0 advantage from their first leg in Turin last week, though Ole Gunnar Solskjaer’s rotated side started somewhat sluggishly, and gave away a penalty after just 17 minutes.

Dan James clumsily brought down Andoni Gorosabel just inside the box, though Mikel Oyarzabel produced a shocking spot-kick, the Spaniard aiming for the top corner only to see his effort go both high and wide into the Stretford End.

United did settle into the game, and Bruno Fernandes came close to extending the Red Devils aggregate lead, the Portuguese striking the bar with a lovely curling effort from the edge of the box, while Sociedad’s Modibo Sagnan also saw a header hit the crossbar at the other end in the second half.

Axel Tuanzebe thought he’d finally opened the scoring on the night with a thumping second-half header from a corner, only for it to be ruled out as VAR spotted a Victor Lindelof foul at the near post.

All in all, though, it wasn’t a game that will live overly long in the memory, unless your name is Shola Shoretire that is, the 17-year-old becoming the youngest ever player to represent Manchester United on the European stage.

Speaking about the youngster, Ole Gunnar Solskjaer backed the teenager to become a big player for the club.

“Shola has got some skills, he’s going to make a very good player here,” he told BT Sport. “It’s a platform tonight, just 15 minutes but it’s something to remember for him at Old Trafford. Maybe he would’ve enjoyed it more with fans because they give you so much energy. But I’m sure all the fans will see him soon.”

United were dumped out of last season’s Europa League at the semi-final stage, that defeat to Sevilla one of four exits at the last four stage of cup competitions under Solskjaer in little over 12 months.

“You remember the defeats more so than the wins,” he added. “To get the semi-finals in any competition, you’re so close. We’ve had three of them, we’ve lost one, so this group knows how it feels.”

The Red Devils have slipped 10 points behind the winning-machine that is Man City in the title race in recent weeks, though the Norwegian insisted his side are a ‘very tight’ group despite their recent setbacks.

“We are a group that are very tight together. You come in, you work every day, you have a few setbacks and knocks. We want to go further but when you have failed before you want to do better. The culture is really improving and we’ve got some fantastic players and fantastic coaches.”

Next up for United is a battle against fellow top-four rivals, Chelsea, who are unbeaten following the appointment of Thomas Tuchel, with Solskjaer saying their upcoming run of fixtures is going to be ‘massive’ in determining his side’s season.

“Now until the international break, I think we have six or seven games – we have Chelsea, Leicester and West Ham – all important games, so these three weeks now are going to be massive for us. But confidence is good and hopefully, we will get a few players back in.”