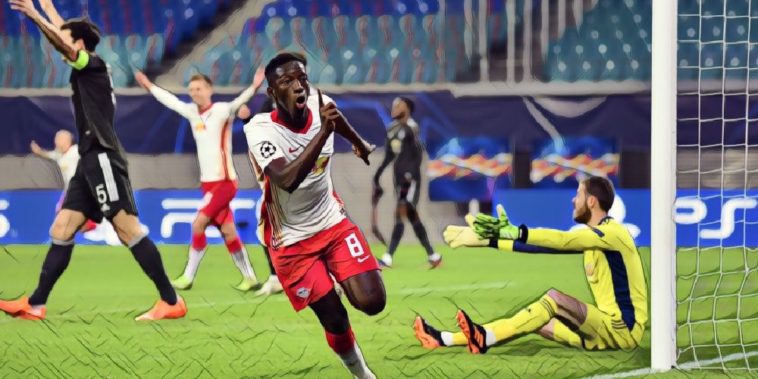 Manchester United crashed out of the UEFA Champions League at the first time of asking after succumbing to a 3-2 loss to RB Leipzig.

Having beaten PSG and Leipzig in the first two games of the group, Manchester United were firmly in pole position to qualify from Group H, but a defeat to Istanbul Basksehir in Turkey on Matchday 3 ultimately proved to be their undoing, their subsequent results leaving the Red Devils needing a point against last season’s semi-finalists.

It was a truly dreadful start for United who were caught sleeping at the back, with on-loan Man City player Angelino meeting Marcel Sabitzer’s cross at the back post and smartly drilling low past David de Gea inside two minutes.

10 minutes later and things went from bad to worse, the Red Devils once again failing to pick up the spare man as Angelino played in a whipped cross across the box for Amadou Haidara to fire home first time at the back post.

Leipzig could have been out of sight by half-time, Emil Forsberg sending an effort wide from a central position amid more slack defending, while the hosts also had a goal ruled out for offside.

United were far improved in the second half, and came within a whisker of pulling one back as a Bruno Fernandes free-kick came back off the bar, but within 60 seconds of hitting the woodwork, Julian Nagelsmann’s side hit the Premier League outfit with a sucker punch. Some more poor Manchester United defending, Justin Kluivert capitalising on some weak goalkeeping from De Gea who seemed to shirk his challenge.

Manchester United are knocked out of the #UCL and are heading into the #UEL pic.twitter.com/RLePS3ekig

Solskjaer’s side kept plugging away and were given a glimmer of hope as Bruno Fernandes slotted home an 80th minute penalty before Paul Pogba responded to talk about his future by rising highest from a corner to head home two minutes later, albeit via a double deflection off Harry Maguire and Ibrahima Kounate.

Their late rally wasn’t enough though, the defeat seeing them drop back into the Europa League, and speaking afterwards Ole Gunnar Solskjaer admitted his side’s Champions League campaign was derailed by the defeat in Istanbul while lamenting their slow start to the game in Leipzig.

“We started too late,” he told BT Sport. “Great spirit and comeback again. It’s different to the Premier League [though], you can’t give a team a three-goal lead and expect to come back. We were unlucky towards the end and you almost thought it was in at the last minute there.

“Of course you can’t say we were good enough, we weren’t. In a difficult group of course, the big defeat for us was the one away to Istanbul – that’s where we lost the points we should have had.

“Today we were close but we knew we had to defend crosses and balls into the box and we just couldn’t clear them.

He did, however, refuse to speak about Pogba’s future at Old Trafford, saying the player should ‘focus on his performances’ following all the talk from his agent, Mino Raiola, in the last 24 hours.

“You have to ask Paul if he is happy or not, I won’t speak for him. He’s working hard in training and he needs to focus on his performances. Now is not the time to discuss transfers.”

United now have to dust themselves off from the disappointment as they prepare to take on Manchester City in the Manchester derby on Saturday evening.

Donkeys: Six Premier League players who ‘had a mare’ this weekend