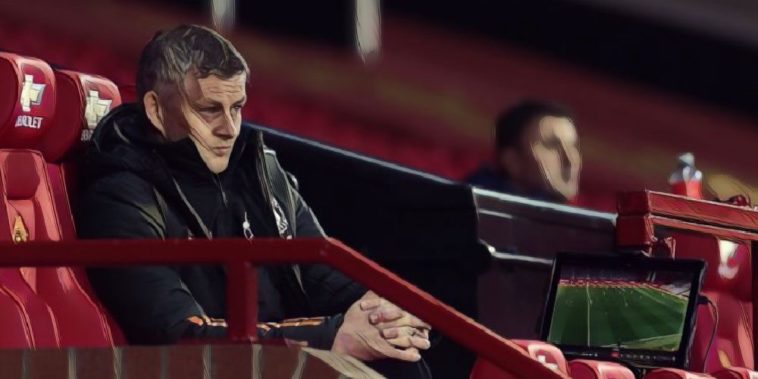 For a second year running, Manchester United were dumped out of the League Cup semi-finals by Manchester City, Ole Gunnar Solskjaer’s side slipping to a 2-0 loss at Old Trafford.

It was a game that wildly contrasted the drab 0-0 draw that the two sides played out in the Premier League last month, and both sides would see a goal apiece chalked off for offside within the opening five minutes.

Kevin de Bruyne thundered an effort against post in the 13th minute, while Phil Foden saw his effort ruled out for yet another offside in what was a lively opening.

However, it was Man City who dominated the majority of the ball, and early in the second half, Pep Guardiola’s side would take the lead. Phil Foden put in a decent delivery from a free-kick on the left, the ball evaded every Manchester United player, before hitting the thigh of John Stones to open the scoring.

After the goal, City looked more content to sit and defend and wait for the spaces to emerge, though in truth Manchester United rarely looked like threatening Zack Steffen’s goal having gone a goal behind.

With seven minutes to play, City booked their place in a fourth successive EFL Cup final as United once again failed to effectively deal with a set-piece. Aaron Wan Bissaka’s headed clearance from a De Bruyne corner landed at the feet of veteran midfielder Fernandinho, who hit a sweetly struck volley low into the bottom corner with ‘keeper Dean Henderson seemingly unsighted.

3 – Manchester United have been eliminated from three of their last four semi-final ties in the League Cup, having progressed from eight of nine before that. Dumped. pic.twitter.com/kmvyXrouZC

Speaking afterwards, Ole Gunnar Solskjaer admitted his side were lacking, both at the back and up front.

“Manchester City can score many great goals. You can accept that,” he told Sky Sports. “[However] When you concede two simple set-plays, it’s very disappointing. Just not good enough in those moments.

“We didn’t create enough big chances. They didn’t either. We didn’t have the extra finesse we’ve had in the games lately. We weren’t good enough today.

“We played against a very good Manchester City team. They played well. When they play well you have to play very well to beat them. We were just lacking that little bit.”

The result means Manchester United have now crashed out of each of the last four cup competitions at the semi-final stage, though the Norwegian insists it wasn’t a psychological stumbling block.

“We’re getting closer. This is a much better version of United than a year ago in those semis.

“It’s not psychological. Sometimes you meet good teams in the semis. We met, at the moment, City are probably the best team in England.”

Next up for the Red Devils is an FA Cup third round tie against Watford, before playing their game in hand against Burnley in the Premier League.

Read – Revealed! The 10 most valuable footballer’s on Planet Earth