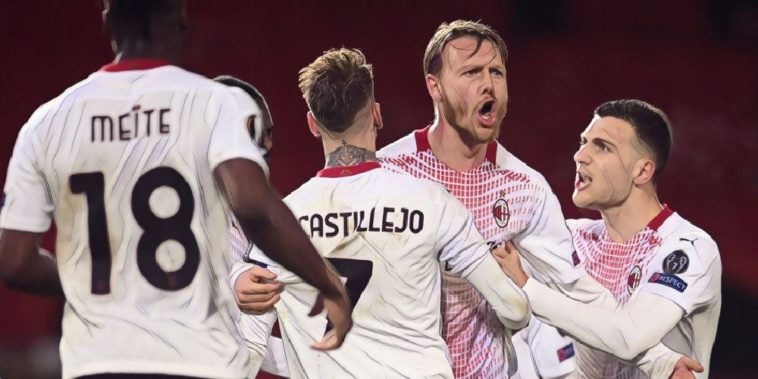 Manchester United’s inconsistent spell continued as they conceded a late equaliser against AC Milan in the first of their Europa League last 16 tie.

Manchester United made four changes to the side that was so impressive in the Manchester derby victory at the weekend, while AC Milan were without a number of regulars, including Mario Mandzukic, Ante Rebic, Hakan Calhanoglu, Theo Hernandez, and former United favourite, Zlatan Ibrahimovic.

It would be Milan who started by far the brighter, seeing a goal ruled out for offside inside the opening six minutes, while Frank Kessie thought he’d given the Italian’s the lead in the 10th minute, the Ivorian midfielder taking the ball down from a throw-in – seemingly with his chest – before firing a superb effort past Henderson from the edge of the box, only for VAR to judge what must have been the most marginal of handballs.

United looked slow and sluggish for large parts of the opening period, though really should have taken the lead from a 39th minute corner, captain Harry Maguire incredibly hitting the post from a yard out with the goal at his mercy at the back post.

Ole Gunnar Solskjaer brought on January signing Amad Diallo at the interval, and within five minutes of his introduction, the youngster scored his first goal for the club. Bruno Fernandes played a deliciously weighted ball in behind the Milan defence, with Diallo spotting Gianluigi Donnarumma off his line before producing a superb flicked header over the Italian ‘keeper to make it 1-0.

United were improved after the break, though AC Milan still had the better of the play and chances, and late into stoppage time they got the equaliser that their overall performance deserved, defender Simon Kjaer heading home to secure a vital away goal, though Dean Henderson will be going to bed tonight thinking he could and probably should have done better.

Each of the last three goals Man Utd have conceded at Old Trafford across all competitions have been from set-pieces.

Time for a bit of practice on the training ground?👀 pic.twitter.com/QIS2tMtrih

Speaking afterwards, Ole Gunnar Solskjaer admitted his side were far off their best.

“We were a long way off. Possession was 50:50 but we were too slow with the possession,” he told BT Sport.

“It is sometimes hard off the back of a game we had (on Sunday) but that is the learning we have to get into ourselves and perform every week.”

David de Gea’s return to Spain for the birth of his child has offered Dean Henderson a chance to stake a claim for the number one position, and while Solskjaer admitted the England international could have done better, he pointed the blame at his side’s structure from the corner kick.

“Its a header from six yards. He can save it of course, I’ve seen him save them.

“But it is the structure that we lose. We drop deep and we get blocked off and Kjaer makes a good run.

“We should’ve attacked the ball with the men we had.”

Amad Diallo was on course to be the headline maker before Kjaer’s late eqauliser, and while many fans will get excited about the former Atalanta winger, the Norwegian insisted he has ‘loads to learn’.

“It’s creative, he plays with freedom,” he said of the teenagers goal. “[It was a] great pass by Bruno who makes the goal. Amad, nice goal, [but] still loads to learn. He’ll be better after that.”

Next up for Solskjaer’s side is a meeting with former United boss, David Moyes, who brings his high-flying West Ham side to Old Trafford.