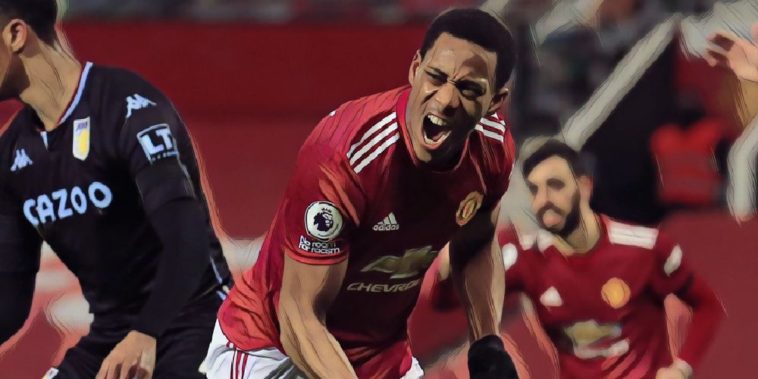 Manchester United moved level on points with Liverpool at the top of the Premier League with an entertaining 2-1 win over an in-form Aston Villa side.

Ole Gunnar Solskjaer’s side started brightly, though after weathering Manchester United’s early pressure, Aston Villa established a foothold in the game, with both sides creating a number of chances.

However, it would be Manchester United who took the lead five minutes before the break. Aaron Wan-Bissaka was released down the right after some good play from Paul Pogba and Marcus Rashford, and while the right-back has often been criticised for his attacking output, the former Crystal Palace man put his cross into a dangerous area, with Anthony Martial stooping to direct his diving header beyond Emi Martinez.

Aston Villa started the second half strongly, with Jack Grealish once again central to his sides best moments, and just before the hour mark, the England international was involved as the visitors grabbed a well-worked leveller. Wan-Bissaka was punished for a lack of concentration at an Aston Villa free-kick, the ball being played into the unmarked Grealish, who put in a sumptuous cross into Bertrand Traore who tucked home at the back post.

However, Villa’s lead lasted just three minutes, Douglas Luiz clumsily clipping Paul Pogba in the area, with Bruno Fernandes doing what he does best and dispatching the resulting penalty past Martinez.

Both ‘keepers would make a number of crucial saves as both sides created plenty of chances in what was a hugely entertaining game, particularly in the second-half, with United holding out for all three points to extend their unbeaten run in the league to 10 games.

📊 Man Utd have won 10 of their opening 16 PL games this season – it took them 26 matches to record 10 PL wins last season pic.twitter.com/6kz27JGYZP

Speaking afterwards, Solskjaer was understandably ‘delighted’ with the three points, but admitted his side could have quite easily have dropped points as Villa piled on some late pressure, with Eric Bailly making an impressive block from a last-minute strike.

“You are always delighted with three points,” he told the BBC. “The performance was good and we created chances. We had a good save at the end and Eric Bailly made a fantastic block so that probably saved two points for us.

“It was maybe a little too open and we wasted chances. We tried to play the Hollywood pass instead of securing the first one and using the space that was there.”

Bruno Fernandes’ strike was his ninth goal from the penalty spot since his arrival in the Premier League 11 months ago.

“He wants to take the penalties and that’s the first thing,” Solskjaer said. “He is never afraid of missing. He has been very safe and is a confident man on the spot.”

9 – Since the start of February 2020, Bruno Fernandes has scored nine penalties in the Premier League – two more than any other player. Formality. pic.twitter.com/FF2pkA3iji

The win was United’s 10th of the season and moves them level on points with champions and bitter rivals, Liverpool, with some starting to talk the Old Trafford outfit up for a potential title challenge, and the Norwegian boss insisted his side have ‘improved immensely’ over the last year.

“These players have a great age. They are learning and are hungry to learn which is important. They come in every day with a hunger and desire to be the best on match day. They have been focused.”

United now have a little bit of an extended rest compared to what they have become used to, next facing Man City in the Carabao Cup semi-finals on Wednesday before facing Watford in the FA Cup three days later.