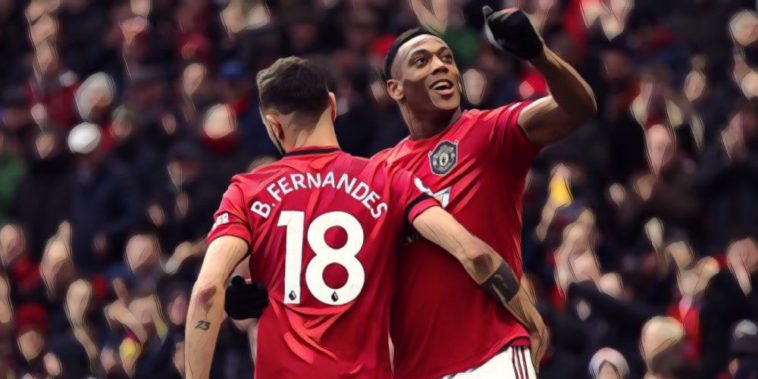 Ole Gunnar Solskjaer has discussed the flourishing partnership between Manchester United’s Anthony Martial and Bruno Fernandes as the Premier League prepares to make its return this month.

English football’s top tier will return to action behind-closed-doors later this month, with United’s pursuit of a top-four finish continuing with a trip to face former manager Jose Mourinho and Tottenham on June 19.

Ahead of the league’s restart, Solskjaer has been discussing the progress of his side, including the form Anthony Martial, who has impressed since being restored to his favoured centre-forward role this season.

Despite missing three months of the season with injuries, the France international has scored 16 times in all competitions, and Solskjaer believes the 24-year-old has enjoyed the best season of his Manchester United career to date.

“Well Anthony’s had a difficult season with injures but he started the season really well and he’s finishing off…well the season’s not finished yet but he did really well towards the end,” Solskjaer told Premier League Productions.

“He’s working hard and for me, Anthony was on the way to his best season at Manchester United so let’s see if he finishes it off and kicks on again.”

Solskjaer also discussed a blossoming partnership between the forward and mid-season signing Bruno Fernandes, the latter having starred since his arrival from Sporting Lisbon in the winter window.

The duo combined to devastating effect with a brilliantly worked goal in the derby victory over Manchester City in March, and the Norwegian believes the signs are promising following the duo’s instant connection.

“Tony and Bruno [Fernandes] have hit it off together so it’s a partnership that we hope can flourish,” he continued.

“We knew he was a quality player and knew that when he came in he would have an impact straight away but you never know if he’s going to settle early in a new country but he’s taken to it like a duck to water.”

Owen: Man Utd ‘going in the right direction’, with Greenwood potentially the ‘next Wayne Rooney’

See also – Herrera opens up on working with Jose Mourinho, Solskjaer and his Man Utd exit