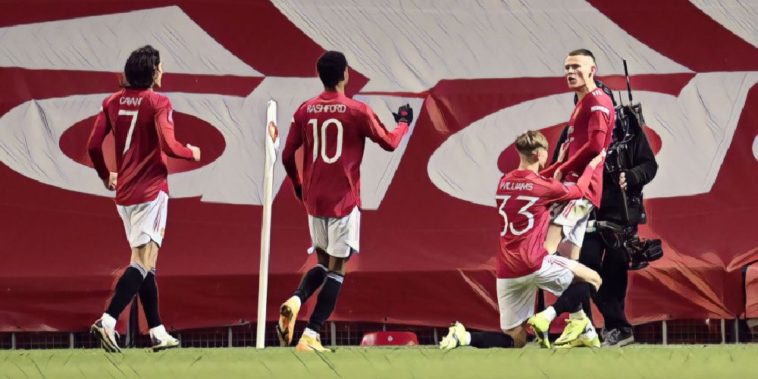 Manchester United’s pursuit of silverware under Ole Gunnar Solskjaer continued as they edged into the quarter-finals of the FA Cup with a 1-0 extra time win over West Ham.

This wasn’t a game that will be getting filed under FA Cup classics, with neither side really looking like scoring in the entire 90 minutes of action.

Manchester United dominated the ball from the outset, with West Ham’s defence making a succession of blocks in the first half, while Fabianski made a superb low save to prevent a deflected Victor Lindelof effort in the first half.

While there were plenty of flurries of snow on a wintery night at Old Trafford, there were very few flurries of quality on the pitch, with both attacks looking somewhat bereft of ideas after the break.

The breakthrough would finally come seven minutes into extra time, Declan Rice losing the ball on the edge of the United box, with Anthony Martial leading a quick Red Devils counter. Bruno Fernandes slipped the ball into the left channel to the overlapping Fred, with the Hammers twice failing to clear the Brazilian’s cross. Marcus Rashford played a deft touch into the path Scott McTominay who met the ball with perfect timing to fire low past the Polish ‘keeper for his seventh of the season for what would prove to be the winner.

Speaking afterwards, Ole Gunnar Solskjaer was keen to see his side be more ‘clinical’ in front of goal, though said it was important for them to get back to winning ways following the disappointment of their 3-3 draw with Everton at the weekend.

“I felt we dominated. I thought we were in complete control of the first half,” the Norwegian told BBC Sport.

7 – Scott McTominay has scored seven goals in his 30 appearances in all competitions this season, the same number has he managed in his 84 other Manchester United matches prior to this campaign. Sauce. #MNUWHU pic.twitter.com/izfwji15i9

“In the second half, it became more of a game. When it’s only 1-0 and we are wasteful, anything can happen to us – we knew that from the last game. It’s just about finishing the game off but we’re through. We’re in the hat and that’s what we wanted.

“I think we got about 15 to 17 shots in the end but we need to be more clinical. We should’ve finished the game off earlier and finished in 90 minutes but sometimes it doesn’t happen.

“We needed to have a good result and a good feeling after today because we were low after the Everton game. It’s hard to take but they were really focused and did the job.

“Of course you want to win every game. We want to challenge and we want to go to the final. That’s what we’re here at Man United for. Sometimes you’re lucky with the draw in the cup – we haven’t been that lucky – but obviously, we move another step closer to the final.”

McTominay’s winner was the third successive match in which the Scotland international has found the back of the net, this season’s tally of seven goals in all competitions already a career high for the 24-year-old.

“Scott used to be a striker and I think he finishes with authority,” Solskjaer added. “You see that he doesn’t mind being in those positions. He just smashed the ball into the net.”

Next up for Man Utd is an away trip to face Premier League strugglers, West Brom, before their European campaign resumes next week against Real Sociedad.