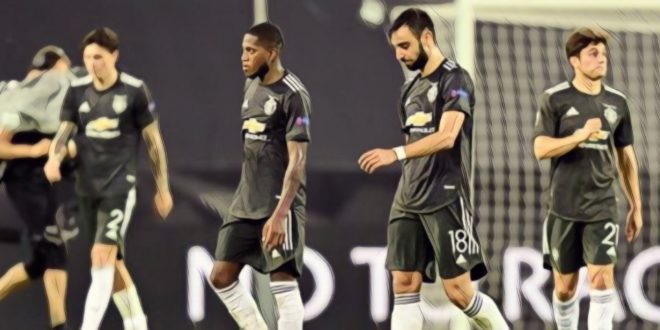 For the third time this season Manchester United fell at the semi-final stage of a cup competition, Ole Gunnar Solskjaer’s side slipping to a 2-1 defeat to Sevilla in the Europa League semi-final in Cologne.

After starting sluggishly in the last round against FC Copenhagen, Manchester United flew out of the blocks tonight and they found themselves ahead after just eight minutes through a familiar source, Portuguese playmaker Bruno Fernandes confidently stroking the ball into the roof of the net from the penalty spot after Marcus Rashford was fouled in the area.

Brazilian midfielder Fred – once again preferred to Nemanja Matic in the holding role – then missed an excellent chance to put the Red Devils two up a few minutes later, but the 27-year-old blazed well wide from eight yards out.

Sevilla began to dominate possession and the La Liga side turned their superiority on the ball into an equaliser after 26 minutes, former Liverpool man Suso steering home a low cross at the back post.

During a first-half in which both sides failed to make the best of promising positions in the final third, United would come closest to taking the lead before the break, but Anthony Martial fired over the bar from the edge of the area when it seemed set up for the Frenchman to provide a trademark finish.

Teenage talent Mason Greenwood almost put United ahead again just after the break, the 18-year-old firing straight at the keeper when played through by Fernandes.

Not long after United would once again find themselves one on one, only to see impressive Sevilla keeper Yassine Bounou deny Martial.

Solskjaer’s men would then be made to pay the ultimate price for their wastefulness in front of goal on 77 minutes, Sevilla substitute Luuk De Jong taking advantage of some slack United defending by firing home a Jesus Navas cross from close range for the match winner.

0/3 – Manchester United in 2019-20 (League Cup, FA Cup, Europa League) are the first ever English top-flight team to fall at the semi-final stage of three different competitions within the same campaign. Heartbreaking. #UEL pic.twitter.com/JLeEbdAZj6

Speaking afterwards United boss Solskjaer admitted his side were punished for not taking their chances and suggested his team showed a lack of maturity at times during the game.

“It’s one of them if you take chances you win comfortably – not always the case in football,” Solskjaer told BT Sport.

”We had moments in spells in both halves where we should have scored a few. We have a young team – some spells showed that this group of players will have to learn and get some consistency in their play.

“When we get the ball down and create chances it’s scintillating at times. The keeper had a fantastic game.

”It’s disappointing we didn’t score because we’ve got players with that quality.

Despite being the only Sevilla player in the area, goalscorer De Jong was somehow allowed to saunter into the six yard box unmarked and Solskjaer admitted that even before that Neves’ cross should have been stopped by young left-back Brandon Williams.

“It’s not just in the box but the run up to the goal is disappointing,” the former United striker said.

”We should have stopped the cross maybe, then the ball got a deflection off Brandon’s [Williams] thigh that changed the direction of the ball.”

Solskjaer insisted he has been happy to see his side recover from a poor start to the season to finish third in the Premier League, although he admitted United need to strengthen their squad in the transfer market this summer if they are to continue to progress.

“Since February we’ve been fantastic. Then again it’s disappointing to go out,” the Norweigan coach continued.

”We’ve come quite a distance. Exciting to work with the boys but you could see at the end – tired legs and tired minds.

”We definitely need to improve to move up the table and take steps in the cups. I’ve never had three semi-finals in one season.

“It’s not about a marquee signing, it’s about quality. The right personality that fits into the group.”

Read – Barcodes and bus upholstery: The most underwhelming Premier League kits of 2020/21