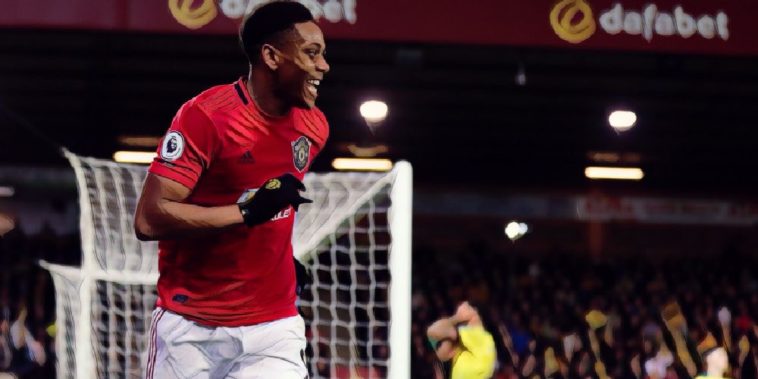 You wait sixth months for an away win, then two come along in the space of four days, Manchester United comfortably beating Norwich 3-1 at Carrow Road.

Despite having struggled for goals all season, especially away from home, Manchester United finally discovered some kind of form in East Anglia. Scott McTominay capitalised on a good spell for the visitors, swivelling in the box to despatch a rasping strike past the helpless Tim Krul after 21 minutes.

United were offered the chance to double their lead after Dan James was adjudged to have been bundled over in the box. VAR eventually overruled Stuart Atwell’s initial decision, though Marcus Rashford’s tame effort from the spot was saved by the Dutch ‘keeper.

Within minutes though, Rashford did find the net, the England international latching onto a superb through ball from James, expertly taking the ball under control before slotting home.

50 #MUFC goals for @MarcusRashford, who makes up for his penalty miss in style ?#NORMUN #Rashford50 pic.twitter.com/t49MUQ3G0k

VAR would then award United yet another penalty, Norwich’s Todd Cantwell turning his back on a long-range strike from Fred with his arms raised, though once again, penalty specialist Krul was up to the job against the resulting spot-kick, this time saving Anthony Martial’s average-looking strike.

It was one of United’s best performances of the season to date, and despite a spirited second-half effort from the Canaries, Anthony Martial sealed the points with a deft finish.

Onel Hernandez netted a late consolation for the hosts, capitalising on a rare mistake from the impressive McTominay in midfield, though Ole Gunnar Solskjaer’s side were full value for the three points which lifted them from 15th to seventh in the Premier League table.

Speaking after the game the Norwegian thought his side could and should have scored more, though thought both of United’s penalties should have been retaken.

“This had been a good week for us,” Solskjaer told BBC Sport. “It started with a decent performance against Liverpool and now two wins away from home. It gives the players confidence and momentum.

“Scott McTominay knows that it is a mistake [for the Norwich goal] but [it was] still a very good performance. He is growing all the time, the kid and he is a top professional. He works hard every day and is a Manchester United player.

“The third was a very good goal and a class finish. It is great for Anthony Martial to score a goal like that. We could and should have had a few more goals.”

They both made up for it. pic.twitter.com/UTGrr95d3P

“I don’t want to talk too much about VAR. I disagree with the first one, the second one is but both should be retaken, the goalkeeper is a yard off his line. We are talking about it again.

“VAR is there to help but when it takes ages like the first penalty, it is not a clean and obvious error. When it took that long, it is a signal that it should not have been.

“We have missed Anthony, he is a very important player for us, the way we play and today Marcus Rashford was excellent down the sides and in the middle. A great response to missing the penalty, chasing back and scoring.”

Read: Bayern Munich insist Muller will not be sold despite Manchester United links