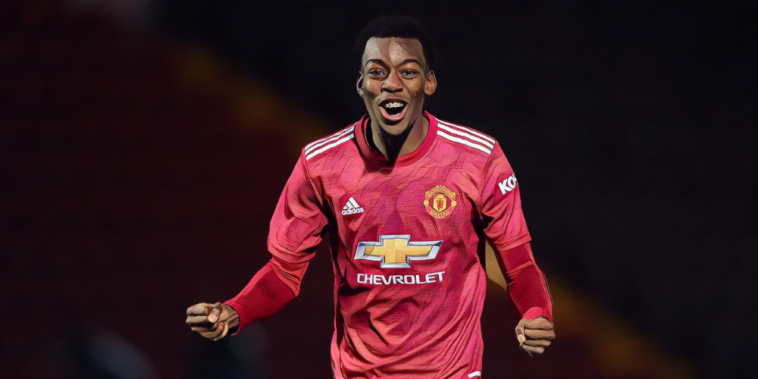 Ole Gunnar Solskjaer has discussed the qualities of Anthony Elanga after promoting the Manchester United youngster to the senior squad.

Elanga is the latest academy graduate to have made the step up to the senior squad during Solskjaer’s reign, with the teenager rewarded following an impressive season with the Red Devils’ U23 side.

The 18-year-old winger has been added to the club’s B list for the Europa League and has joined the Manchester United travelling squad ahead of this evening’s quarter-final first leg with Granada, and Solskjaer says the youngster is not there to simply make up the numbers.

“I’ve got faith in the young lads, of course, and, in Anthony, we have a player with good skills, a great attitude and he scores goals from either the right or left, and he’s got good pace,” he told the club website.

“He’s not just there for experience, he might actually play a part, who knows?

“He’s got that X-factor and I like players with speed and acceleration and he’s definitely got that.”

Solskjaer confirmed that Elanga will be named on the bench for the clash with the Spanish side, admitting he has been impressed with the winger’s performances in training and revealing his belief that the latest academy graduate can bring an ‘X-factor’ to the side.

“Anthony will be in the squad, he’ll be on the bench,” Solskjaer added.

“He’s impressed when he’s been in training with us. He was very unlucky two or three months ago, when he got a bad injury and he worked really hard to come back because he was just due to move into the first-team squad back then.

“He has got some X-factor, some attributes. It’s not like a gift, but the pace and acceleration and speed that he’s got, that’s a given for wingers.

“When he’s got that speed, he’s always got qualities I like. He’s a goalscoring winger, he’s confident. He likes to beat men and can finish with his right foot and left foot and he’s got a great attitude.

“He has an appetite and hunger to improve and when he’s been training with us, he’s not been fazed by it.

“He’s confident. He’s not just here for the experience, he’s ready to play a part if he has to.”