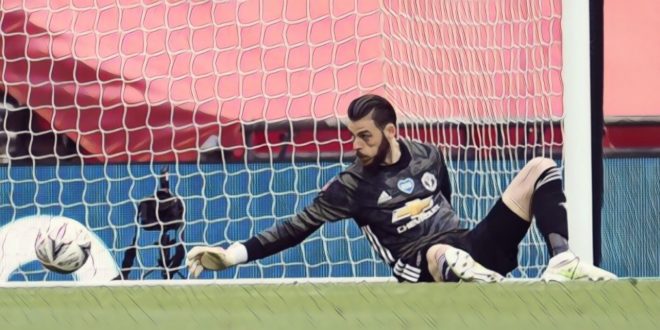 Manchester United’s hopes of winning their 13th FA Cup came to an abrupt end today, the Red Devils out thought and out fought by an impressive Chelsea side, Frank Lampard’s men coming away from Wembley as 3-1 winners.

Both managers matched each other up with a 3-5-2 formation, though it was Chelsea who looked the more threatening during the opening exchanges, Reece James’ long-range effort forcing David De Gea into a decent save and Marcos Alonso heading over at the back stick.

Man United struggled to play through Chelsea’s well organised press for most of the first-half, with a rather tame Bruno Fernandes free-kick that Willy Caballero easily tipped over the bar the closest the Red Devils came to breaking the deadlock.

There would be 12 minutes of injury time played at the end of the first period after a serious head injury to Eric Bailly, and Chelsea used the added time to deservedly take the lead in the 11th of those minutes.

Four time FA Cup winner Olivier Giroud has been in excellent form for the Blues as of late and it was the Frenchman’s deft near-post flick from a Cesar Azpilicueta cross that saw Lampard’s men go in at the break a goal up.

Many will have felt United keeper De Gea should have done better with Giroud’s opener, but just minutes after the restart the 29-year-old dropped an absolute clanger, the Spaniard fluffing his lines with Mason Mount’s low strike from the edge of the area following an errant pass from Brandon Williams.

United boss Ole Gunnar Solskjaer looked to his bench to try get back into the game, introducing Paul Pogba and Mason Greenwood, but the Red Devils still struggled to create any chances of note.

Chelsea would then seal their right to face Arsenal in the showpiece event on August 1st in the 74th minute when Harry Maguire diverted a dangerous Alonso cross from the left into his own net and past the hapless De Gea.

United would score a consolation via a Bruno Fernandes penalty with five minutes left to play, although any hope of a late comeback failed to materialise, with Chelsea’s superiority in every aspect of the game continuing up until the final whistle.

Solskjaer had complained about Chelsea having an additional 48 hours of preparation after his sides 2-0 win over Crystal Palace on Thursday, but the United boss insisted he wouldn’t use that as an excuse for his teams below-par showing, while he rued a lack of concentration from his men for conceding just before the half-time break.

“Of course coming in at half time with the goal after that long lay off was a big blow for us. We lost concentation and that was disappointing,” Solskjaer told BBC Sport.

“Chelsea had an extra 48 hours, that’s just a fact but it’s no excuse, I can’t use excuses. It is what it is, we would rather have the semi to play than not, I won’t make a fuss out of that.”

Eyebrows were raised when the team sheets came in and Solskjaer opted for De Gea over regular cup goalkeeper Sergio Romero, while he dropped in-form duo Paul Pogba and Mason Greenwood to the bench. The 47-year-old coach insisted he stood by his team selection, though not for the first time this season, he was forced to defend his goalkeeper after a costly error.

“You always question your decisions,” the Norweigan coach stated.

“I can’t speak for David de Gea’s confidence but he is mentally very strong. He knows he should save that one 100 times out of 100 but that’s football for you. I made the decison to play him and mentally he was ready for it.

“You know Olivier Giroud’s movement you know he goes to the near post and we should defend that better. We are a little too late in those situations and the second goal was very avoidable.”

6 – Manchester United have been eliminated from the FA Cup by Chelsea for a sixth time (including three of the last four seasons) – only Arsenal (7) have knocked the Red Devils out of the competition on more occasions. Agony. #MNUCHE pic.twitter.com/q7ldUjR8Gv

Solskjaer finished off his post-match comments by wishing the stricken Bailly well and revealing that his side need to brush off today’s comprehensive defeat as they look to seal a place in the top four and go as far as possible in the Europa League.

“Eric Bailly is hopefully fine, he had a cut on his head but hopefully he will be fine.

“There is no time to feel sorry for ourselves, we have two games this week and then the Europa League. We will get our heads ready and our legs ready and go again.”

Next up for United is home clash with West Ham, before they travel to the King Power to face top-four rivals Leicester in their final game of the Premier League season.