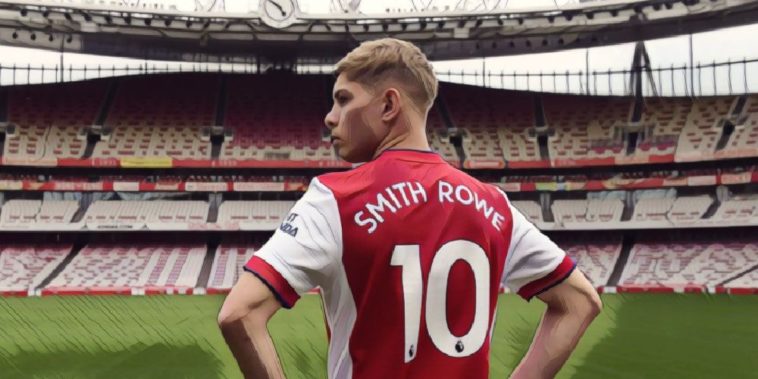 Emile Smith Rowe has put pen to paper on a new deal to keep him at Arsenal for the long-term, while he has also been handed the club’s famous number 10 shirt.

The youngster enjoyed a breakthrough campaign for the Gunners last season, establishing himself as an integral part of the first team along with fellow youngster, Bukayo Saka.

Smith Rowe has previously had spells on loan with RB Leipzig and Huddersfield Town, before being handed a regular opportunity as Arsenal struggled on the field last season, the academy graduate going on to make 20 appearances in the Premier League where he scored twice and provided four assists.

His dynamic performances attracted the attention of Aston Villa earlier this summer, the ambitious Midlands club seeing a couple of bids turned down for the player, with Mikel Arteta determined to keep the playmaker at the club.

The 20-year-old has now ended all speculation by signing a new ‘long-term’ deal at Arsenal, while he has also been handed the number 10 shirt, a number held by former club greats such as Denis Bergkamp, Robin van Persie and most recently, Mesut Ozil.

Speaking about the deal, Mikel Arteta lauded the player’s intelligence and technical ability.

“As we all saw last season, Emile is an intelligent player with excellent ability,” the told arsenal.com. “His sharpness on the turn and exceptional vision have already made him a key player for us.

“His attitude and willingness to learn have also been very impressive. Huge credit to our team in our academy who have given Emile a great education and have worked superbly to help with his development through the age groups.

“Along with the first-team staff, huge credit also goes to our senior players, who have played such an important role to help Emile develop, gain confidence and perform the way he did last season.

“I know the fans will join us in being delighted that Emile has committed his future to the club. We’re now looking forward to helping him develop further and seeing him become even more important to the strong young team we’re building.”