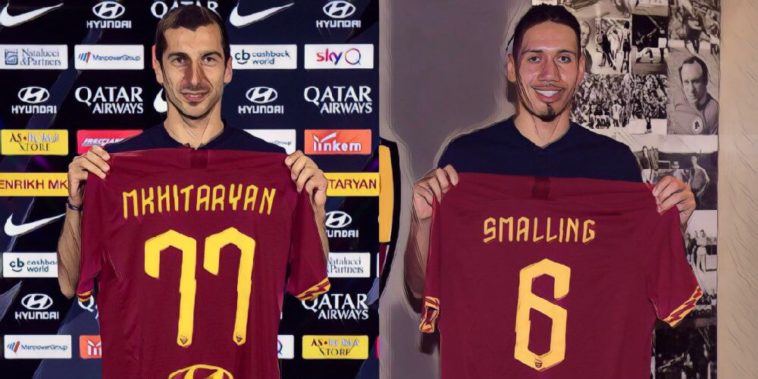 Chris Smalling and Henrikh Mkhitaryan are unsure if they will return to Manchester United and Arsenal respectively following their season-long loans at Roma.

Having been denied a deadline day move to Premier League side Everton on August 8th, Smalling made a surprise move across Europe to Serie A side Roma before the European deadline, with the centre-back set to spend the season in the Italian capital.

The 31-cap England international has been training with his new club for the last week, taking a place on the bench for last weekends Rome derby against Lazio, and speaking at a press conference to formally introduce him to the media, the on-loan Manchester United man admitted that he can see his future being in Italy for the ‘longer-term’.

“To be able to have the chance at a big club, and then if it prolongs and the club is happy, then I can definitely see a longer-term future in Italy,” said Smalling.

Chris Smalling " I can definitely see a long term future in Italy " pic.twitter.com/hmBPgFSfik

Meanwhile, Smalling’s former Man Utd teammate Henrikh Mkhitaryan also made a deadline day move to Roma, just 24 hours after coming on as a sub for Arsenal in the North London derby.

Speaking following Armenia’s 3-1 loss to Italy in their Euro 2020 qualifying group on Friday night, Mkhitaryan was also unsure on whether he would be returning to the Emirates at the end of the season following what has been a wholly disappointing spell in England.

“Let’s first see what I can do at Roma and at the end of the season I think we can talk if I will have the possibility to stay or to go to something else, I don’t know,” he told reporters, via VBET News.

“Now, I cannot say about the future, it’s better to be focused on the next games.”

Roma have made a slow start to the new Serie A campaign, drawing against Genoa and Lazio in their opening two games.