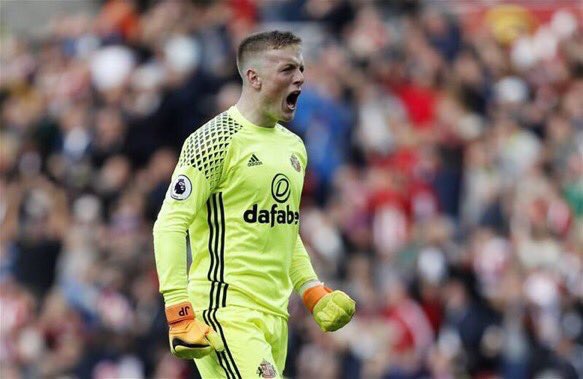 Sunderland may be down and out of the Premier League already, but some of their players will still be playing top flight football next season.

Jermain Defoe has already admitted he would leave if the club were relegated, whilst goalkeeper Jordan Pickford is one of the best talents in the Premier League.

The young England goalkeepers performances for David Moyes’ beleaguered side have been one of the Black Cats’ only success stories.

According to The Telegraph, his form between the sticks has lead to six top Premier League clubs to be interested in his services.

Arsenal have had a few problems in the goalkeeping department with Petr Cech making more mistakes as time goes on.

David Ospina is believed to be leaving to play his football in Turkey.

Joel Robles is finally Everton’s number one, but doubts remain if he is actually good enough.

Despite signing a goalkeeper last summer, Jurgen Klopp can’t decide between Loris Karius and Simon Mignolet as to who is his first choice.

Got rid of Mr Man City Joe Hart to replace him with calamity Claudio Bravo.

Bravo’s understudy Willy Caballero is out of contract this summer.

The only club in this list with two solid goalkeepers – but for how long?

David de Gea has been linked with a move to Real Madrid once more.

Spanish goalkeeper Adrian has been linked with a move away.

With Pickford being so young and talented, pretty much the polar opposite to everyone else in the Sunderland team, the Black Cats will demand a high price.

Ready to cash in?

“At the moment, I really wouldn’t know what the odds are on him staying,”

“Obviously, it’s up to the club, but if Jordan was to go elsewhere and not be the number one, that wouldn’t be good for him.”

“You can see what he does for us with the saves he makes. He’s been outstanding from day one. The saves he made against Hull, they weren’t even special, he makes them all the time.”