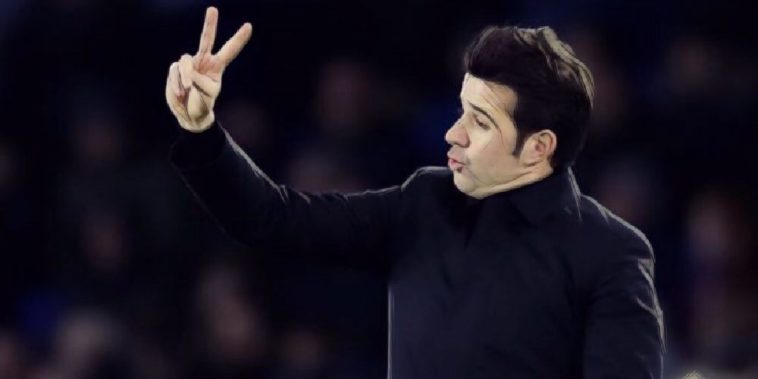 Marco Silva was impressed with Everton’s improved performance, despite sliding to a 2-0 defeat to Manchester City at Goodison Park this evening.

It has been a pretty disappointing season for the Toffees this campaign, who slipped to a very disappointing 3-1 defeat against newly promoted Wolves on Saturday.

With the Champions in town, Marco Silva made five changes to his side, but it seemed to have the desired effect, with the Toffees putting in a much-improved performance compared to the one that they produced at the weekend.

Despite the improvement in performance, Everton’s inability to defend set pieces would be their ultimate undoing, with Aymeric Laporte finding himself unmarked in the box deep into first-half stoppage time, to thunder a header into the back of the net, before Gabriel Jesus secured the points in the 97th minute.

Speaking after the game, Marco Silva said that wants to see similar performance levels in the Blues’ future fixtures while admitting they are desperately trying to improve their record of defending set-pieces.

“There are positives but again we didn’t take the points we want and we are working to achieve. At the moment bad things come too easy, we concede after 47 and 97 minutes. Just working like we did tonight, things will change for us, I am really positive. The team showed what we must do.

“The fans are so good, at the end of the match what they did for our players, I don’t have doubts. We are all together and we will give them what they want and what they deserve.

“Everything was different compared to Wolves, I have to be honest. This has to be our image as a team. We must be consistent, it is an obligation for us. A desire to win, an aggression, it is what we have to do every time against every team. You have to respect every team.

“Be aggressive at set-pieces, we were in the zone we must be in, we moved a little bit, it was a good delivery and header but we have to challenge. I have to speak with my players about this, it is not normal.

“I cannot understand why we must play tonight, it is very tough for us.”