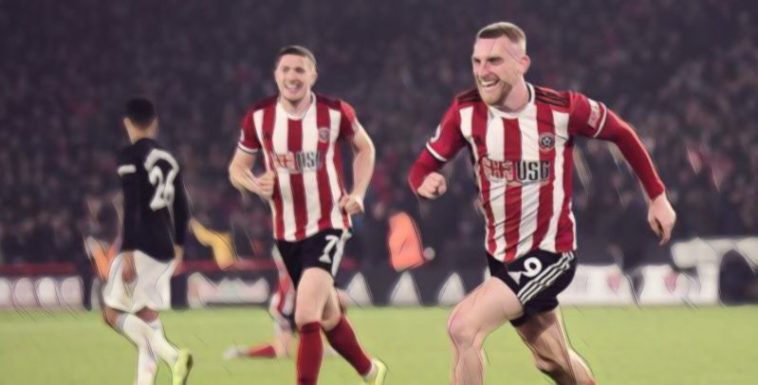 Manchester United looked on course to take three hard-fought and somewhat undeserved points from Bramall Lane after coming from two goals down to lead 3-2 going into the final minutes, but a late Oli McBurnie strike, after a VAR check, ensured the points were shared.

Could not have had an easier first half of Premier League football on his debut, but his lack of first-team action could potentially have led to some slightly nervy defending when his team were under the cosh.

Joined the attack when he could but found it more difficult when Manchester United began piling on the pressure.

Used his experience well to ensure he was never found out for pace against a much quicker and younger forward line and made a couple of perfectly timed challenges on Marcus Rashford to prevent dangerous counter-attacks.

Dealt well for the most part but struggled when James became more direct with his running late on.

Was always an option on the right-hand side and combined well with Basham and Lundstrom, especially in the first half when the Man United defence didn’t know whether to go tight or back off.

Worked tirelessly throughout, had one powerful effort from the edge of the area that forced De Gea into a great save and his run from midfield and subsequent shot led to the first goal of the game.

Kept things ticking along in the middle of the park and did the simple things well, something harder to do than it sounds.

His desire to run from midfield and get himself into the box got him his goal and he played a fantastic return pass to Mousset for the second. A hub of creativity for his side.

Was a particular threat in the first half and had an entertaining match-up with Wan-Bissaka throughout the game.

Worked hard for the team and understandably looked leggy towards the end. However, he lacked confidence in front of goal. David McGoal-Drought may be a more fitting name.

Was a constant thorn in Manchester United’s side and gave Phil Jones, in particular, the run around. Showed strength, pace and composure to set up the shot that led to the first goal and took his own goal superbly. His impact can best be summed up by how much he was missed when he went off. The Blades will hope his hamstring does not keep him out for too long.

Was busy but not the same player he was in the Championship last season.

Had a couple of good runs and his pressing allowed him to dig out the cross for McBurnie’s equaliser.

Has struggled since his summer move from Swansea, both on and off the field, but this is what he was brought in to do. Made sure his team took away a point with an instinctive finish.

Produced a world-class double save in the first half and saved well before the rebound fell to Fleck for the opening goal. Maybe it is too much to suggest he could have done slightly better with McBurnie’s equaliser.

Had a difficult time against a lively attack and would have been expected to bring calm to the backline and see out the win.

It was nearly a happy homecoming for the Manchester United captain, who brought the ball out well when his side were on the front foot but could have marshalled his defence better in the closing moments.

Was ran ragged by Mousset and may spend another period out of the side after this display. Was subbed off at half-time.

A couple of strong challenges and showed his great athleticism but needs to provide more as an attacking outlet if he wants to take his game to the next level.

Gave the ball away for the Mousset goal and was sloppy in possession throughout. Struggled in a deeper role but also did not provide enough going forward to suggest he is the answer to Man United’s creative issues.

Struggled to make an impact and look miles off being a £50 million midfielder.

Had a difficult first period but showed tenacity with some strong challenges and took his goal superbly.

Was wasteful in possession early on but created opportunities when he became more direct. His ball stood up to the back post created Williams’ goal and he put it on a plate for Rashford to make it 3-2.

His pace was always a worry for the Sheffield United defence. Put in a delightful ball for Greenwood to equalise and finished with aplomb to put his side ahead. He is fast becoming Manchester United’s main man.

A quiet game for the Frenchman but played a perfectly weighted pass for James to set up Rashford for his side’s third goal.

Offered more than his midfield teammates, although that is not saying much, but remains a shadow of the player that was an England regular.

Greenwood – 7
A perfectly timed run to poke in a poacher’s finish for his first Premier League goal.