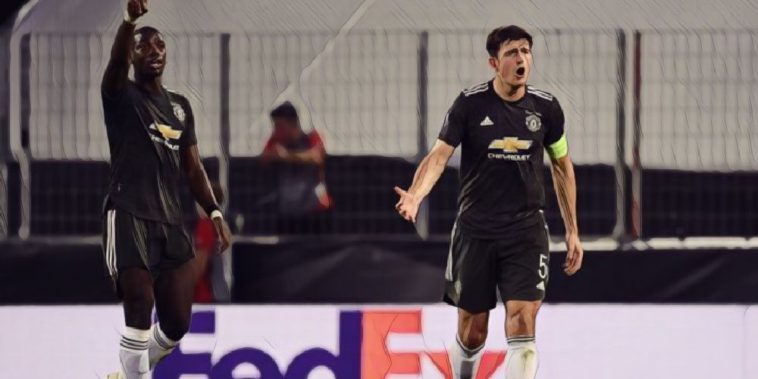 Ole Gunnar Solskjaer’s hopes of ending his first full season with major silverware were ended with a humbling 2-1 defeat to Sevilla in the semi-finals of the Europa League, United paying the price for a series of missed opportunities and lapses of concentration in defence.

Bruno Fernandes’ had handed United an early lead from the penalty spot before Suso drew the sides level before half-time, only for Luuk de Jong to book Sevilla’s final in yet another Europa League final, turning home Jesus Navas’ cross after finding space inside the penalty area.

United’s defensive options were exposed as they crashed out of their third semi-final of the season, with Victor Lindelof and Aaron Wan-Bissaka notably switching off to lose De Jong for Sevilla’s winner.

Former Manchester United midfielder Scholes was critical of Lindelof’s performance, and believes Solskjaer must find a long-term partner for Maguire at the heart of the defence next season.

“As much as United deserved to win, there’s no doubt about that, they were the better team, you have to say the second goal, the defensive part of that was shocking,” Scholes told BT Sport.

“Lindelof and [Harry] Maguire, both out past the near post, there’s one centre-forward, Lindelof has to see him. Then Wan-Bissaka has to cover for him if he doesn’t think he sees him.

"You can almost blame the full back four!" ?

"How can your centre-half not see where the centre-forward is?!" ?

Paul Scholes and Paul Ince analyse the goal that sent Manchester United out of Europe…#Club2020 pic.twitter.com/5zpn5kvogq

“Surely Lindelof, as a centre-half, he’s got his centre-forward, he’s got to be looking at him, his body angle’s all wrong.

“If they avoid that I think they will go on and score a goal because Sevilla looks knackered. They didn’t look like they were going to create a chance other than that one.

“There’s a lot wrong with the goal. You can almost blame the whole back four for this goal. [Brandon] Williams doesn’t get to the ball, where Maguire is, I don’t know. But for me Lindelof is the biggest problem.”

Scholes urged former teammate Solskjaer to sign a replacement for Lindelof to help cover for Maguire’s ‘weaknesses’, the United captain having a glaring lack of pace.

“I think they could do with a centre half, I’ve said that all along,” he added.

“I’m not sure Lindelof going to be good enough as a partner for Maguire. I think they need a dominant defender next to him.

“Defensively, the full backs are OK. On the ball you’d have to question but defensively they’re OK.

“I think the defensive record over the last 15, 20 games has been very good, probably one of the best in the league so you have to take that into respect as well.

“But I still think a dominant centre-half next to Maguire, just to cover for the slight weaknesses he has.”

United have been linked with several defensive options throughout the summer transfer window to date despite their focus largely centring around a pursuit of Borussia Dortmund winger Jadon Sancho, including reported long-term targets in RB Leipzig’s Dayot Upamecano and Napoli’s Kalidou Koulibaly.

Lille centre-back Gabriel Magalhaes – also a transfer target for Arsenal, Everton and Napoli – is also believed to be on the Red Devils’ radar, the French side’s president, Gérard Lopez, having confirmed the club have accepted several proposals for the in-demand star.