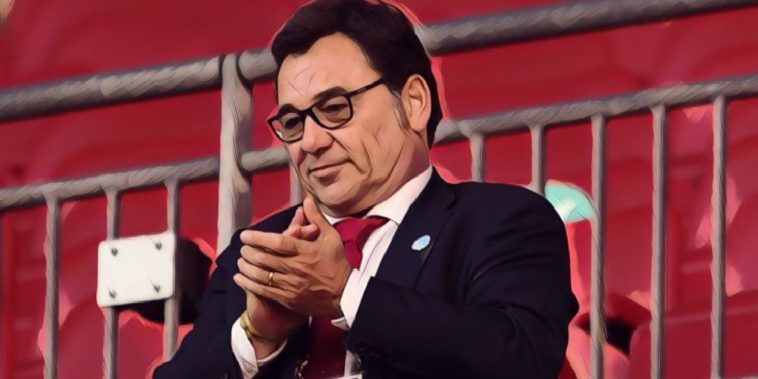 Arsenal have confirmed the departure of head of football Raul Sanllehi in what is another structural shake-up of the North London club.

The Gunners have previously enjoyed years of stability in the boardroom, with David Dein and Ivan Gazidis enjoying lengthy periods in charge at the Emirates; Dein the club’s vice-chairman from 1983 until 2007, before Gazidis took the role of chief executive from 2009 until 2018.

Gazidis decided to overhaul the club’s hierarchy before his departure for AC Milan, Vinai Venkatesham taking the role of managing director while former Barcelona director of football Raul Sanllehi was appointed as Arsenal‘s head of football relations before moving into the head of football role.

Sven Mislintat was appointed as the club’s head of recruitment in 2017, although he left after just 15 months with Sky Sports reporting at the time that his departure was due to ‘differences of opinion’ with Sanllehi, as well as a ‘frustration’ with the club’s lack of financial power – the German since branding the club ‘dysfunctional’ and ‘an absolute mess’.

The North London club appointed former midfielder Edu as their first-ever technical director last summer, and now they have confirmed that Sanllehi’s role will be overtaken by Venkatesham, with the Guardian reporting that the club is looking to ‘streamline their off-field structure’.

“Raul has made a big contribution during his time with us and will always be part of the Arsenal family. We thank him for all his hard work and expertise and wish him every future success,” a statement from the Kroenke family reads on the Arsenal website.

“We have no doubt that Vinai is the right person to take the club forward. He has shown outstanding leadership during the current crisis and is held in high regard internally and externally. We know everyone will rally round him so we can move forward successfully.”

Meanwhile, the departing Sanllehi gave his backing to Edu and manager Mikel Arteta to lead the club forward.

“I’m proud and pleased with the contribution I’ve made at Arsenal over the past three years, and look forward to enjoying the club’s future success. Arsenal is a true footballing institution,” the Spaniard said.

“I am proud to have been part of its history and I thank Stan and Josh Kroenke for this opportunity. Working with Vinai, we have built a top team for the future. Mikel has made an extremely positive impact since his arrival and has formed a strong team with our technical director, Edu.

“The academy is in very safe hands with Per, and Huss Fahmy is a talented and highly-capable leader of our football operations. Personally, I now look forward to taking some time off and spending time with family and friends before setting to work on a new challenge and cheering Arsenal on to great things.”

Arsenal have recently faced criticism following their announcement of 55 staff redundancies, while committing themselves to a multi-million-pound three-year deal to land 32-year-old Willian.

See also – Sharp Shooters: The 7 Premier League players with the best goals per shot ratio in 19/20