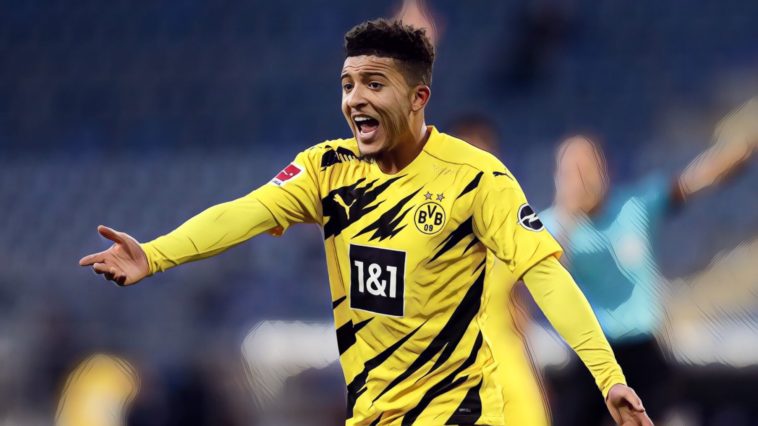 Borussia Dortmund starlet Jadon Sancho is said to be ‘more confident than ever’ of securing a move to Manchester United this summer, amid continued speculation regarding his future.

Despite a slow start to the current campaign following the collapse of his much-anticipated switch to Old Trafford last summer, the 21-year-old has come alive in the second-half of the season, amassing 30 plus goal involvements across all competitions for the third season in a row.

The former Manchester City man – who arrived at Westfalenstadion in 2017 – currently sits on 14 goals and 18 assists for the club in all competitions, including four goals in his last two games, his most recent brace helping the German club to an impressive 4-1 win over RB Leipzig in the DFB-Pokal final.

Following such superb form, the England international appears to once looks set to dominate the headlines, especially after Dortmund CEO Michael Zorc recently admitting that the club has a ‘gentleman’s agreement’ with the player to allow him to leave at the end of the season.

Having pulled out of a deal for the player last summer after refusing to meet Dortmund’s £108m asking price, United appear frontrunners to again try and secure his services in the coming months, with Eurosport reporting that player’s camp are ‘more confident than ever’ that a move to Manchester will finally come to fruition.

The report suggests that the Bundesliga side are set to reduce their demands to around £85m, although the Red Devils are likely to begin negotiations with an offer closer to £65m-£75m, amid the current economic situation.

It's the Jadon Sancho Show 🤩💫

The back flick, the cutback, and the finish 🤝

Ole Gunnar Solskjaer’s side have been without a genuine right-winger for a number of years now, with Sancho – who can also be deployed off the left – likely to fill that void, despite the impressive recent form of Mason Greenwood.

The teenager looks set to make the switch to centre-forward in the coming years, while the Premier League side has recently tied down veteran striker Edinson Cavani to a new one-year deal, leading to suggestions that the club will favour a move for wideman Sancho, rather than opt to bring in a striker.

While a move for the skilful forward looks more likely than ever, the report does outline that negotiations will be difficult this summer, particularly if he is selected in Gareth Southgate’s England squad for the upcoming European Championship’s.

With that tournament beginning on 11 June and ending a month later, it could well lead to yet another long, drawn-out transfer saga, as a deal is unlikely to be struck until the tournament ends.