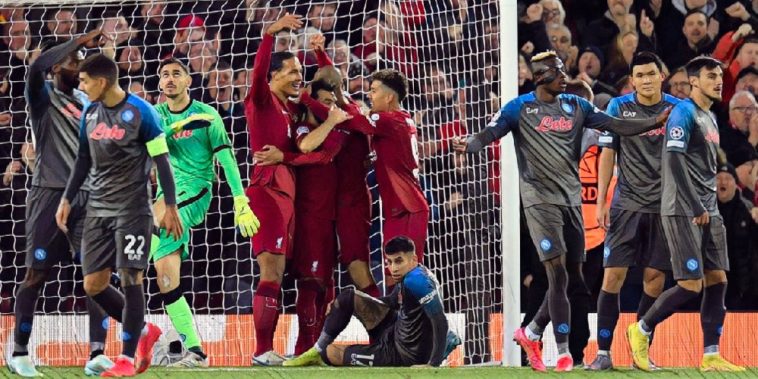 Liverpool scored two late goals to round off their Champions League group stage with a 2-0 win over Napoli.

Both sides came into the clash having already secured their passage to the knockout stages, though Liverpool’s chances of topping Group A always looked slender, with the Premier League side needing to beat their Italian counterparts by four goals.

Despite that, though, both sides sent out strong lineups, and it was a lively opening to proceedings at Anfield, with both having chances to open the scoring at each end.

It was Napoli who thought they had taken the lead early in the second half, defender Leo Ostigard diving to head home a free-kick, only for VAR to finally rule it out for a marginal offside after an absolute eternity.

It looked as though the game was drifting towards being a 0-0 draw, but with five minutes remaining, Liverpool would finally bag a goal. Darwin Nunez’s header from a corner was saved on the line by Alex Meret, though the Italian’s save dropped kindly to Mohamed Salah who prodded over the line.

Liverpool did net another in the eighth minute of added time to confirm Napoli’s first defeat of the season, Darwin Nunez poking home from off the line after Virgil van Dijk’s effort had been saved.

A fan of those European nights. ✨ pic.twitter.com/GumNf6i3SZ

Speaking after the game, goalscorer Mohamed Salah – who has now netted in five consecutive Champions League games – said it is the ‘best feeling’ to beat ‘one of the best teams in the world’.

“To win against one of the best teams in the world is the best feeling,” he told BT Sport.

“We have to carry it on, it’s a good result which will give us more confidence for in the cup and league.”

While the teams had to wait an age for Ostigard’s effort to be ruled out, both of Liverpool’s goals had to be checked by VAR also, with Salah revealing he wasn’t entirely sure it was his goal or not.

“Honestly I didn’t know it was my goal because the ball was in. Thanks for confirming that!

“Anyone can score, the most important thing is the team.”

Liverpool have been in inconsistent form in recent weeks, and the Egyptian said the result and performance will hopefully push the Reds to better things this season.

“I think it’s important that we won today.” he said.

“We played a good game, we were quicker on the ball and recovered the ball quick too.

“We aren’t doing great in the league, but this will push us and then hopefully we can win more.”