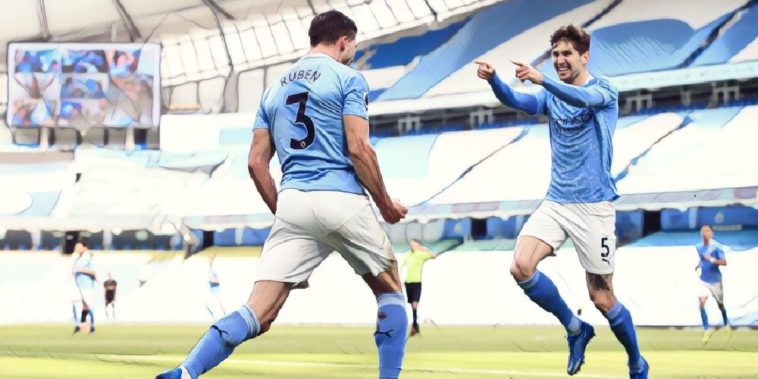 Manchester City defender Ruben Dias has opened up on his connection with centre-back partner John Stones, while also naming his inspirations as a player.

The former Benfica man has enjoyed a remarkable first season in English football, proving the catalyst for City’s surge towards the Premier League title, as well as progress to the Champions League final.

The summer signing has seemingly filled the void left by club legend Vincent Kompany, both as a hugely talented defender, but also as a real leader in Pep Guardiola’s side, despite having only recently turned 24.

Such impressive and instrumental displays saw the Portugal international recently awarded the FWA Footballer of the Year award, becoming the first defender to claim the accolade since 1989.

His full-blooded, aggressive and potentially old-school defensive approach has already seen him becoming something of cult hero, although the City man himself has revealed who his inspirations are as a player.

“I’ve studied many,” he told the Times. “Ricardo Carvalho’s definitely one of them. I’ve watched many games of him when I was a young kid.

“He was always one of my main references because he was Portuguese and one of the best in the world in his time. He saw the game faster than the others. He’s always been a reference, like Pepe, like José Fonte. These two I learnt a lot from. I’m still learning — I’ll be learning until I retire.”

The central defender also spoke of the ‘spirit’ of Portuguese players, pointing to former Manchester United man and international colleague Cristiano Ronaldo as an ‘example’ for everyone.

“It’s just in us, the way we love the game, the culture in Portugal,” Dias said. “Nowadays many kids are playing Fifa at home but when I was a young kid, I was playing football every single day at school, before the classes in the afternoon. That spirit is very much inside every Portuguese. Our history and culture makes us believe we can be good.

“And recently we have Cristiano [Ronaldo] setting such a big example. He’s a role model for the Portuguese, for everybody. He’s an example of a mentality you must have: winning, and then after winning keep going, keep winning, keep wanting more. That’s the way to live.”

Dias’ debut City campaign has seen him strike up an excellent defensive partnership with the previously outcast John Stones, the Portuguese putting their fine form down to their ‘desire to win’.

“We connect very well because we want to win very much,” he said. “Essentially that’s it, the desire to win, the desire to be successful and the desire to be there with your partner, because football’s a collective sport. Without your team-mates you’re nothing, but if you get them on your side then you conquer the world.”