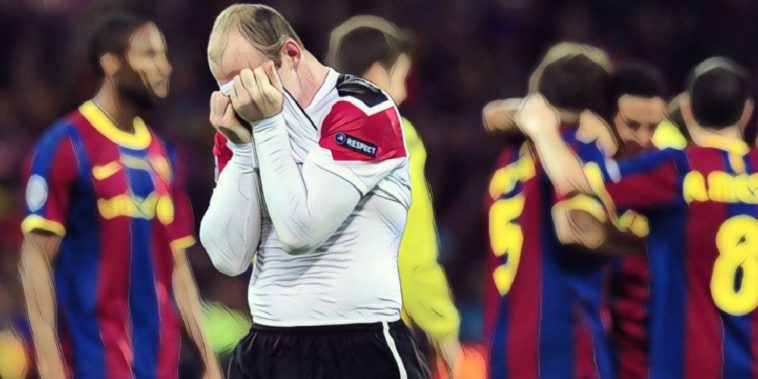 Wayne Rooney has admitted that Manchester United’s tactical approach in the 2009 and 2011 Champions League finals against Barcelona was ‘suicidal’.

Having been crowned Champions of Europe in Moscow in 2008, Manchester United would reach a second consecutive final, though came up against a Barcelona side who had become pass masters under Pep Guardiola. United would attempt to go toe-to-toe with the Catalan club, and were duly beaten 2-0 in Rome coutesy of goals from Samuel Eto’o and Lionel Messi.

Two years later at Wembley, the Champions League final was once again played out between the two European heavyweights, and once again, it was Guardiola’s side who left with the trophy, the Catalans this time running out comprehensive 3-1 winners.

Since then, Guardiola has taken his tiki-taka style football to Bayern Munich and now on to Manchester City, with Real Madrid looking to overcome a 2-1 deficit when they play City next week in their second leg last-16 tie at the Etihad, and writing in his column in the Sunday Times, Rooney admitted that trying to play Guardiola’s teams at their own game is ‘suicidal’.

“It’s always hard for a club like Real to go into a game saying ‘we’ll surrender the ball’,” Rooney wrote. “It is the same for United.

“But we lost two Champions League finals going toe-to-toe with Guardiola’s Barcelona, by trying to press high and get round them, which was suicidal.

“I remember Alex Ferguson saying ‘we’re Man United and we’re going to attack, it’s in the culture of this football club’ and thinking ‘I’m not too sure about this’.

“I think all the players knew, deep down, it was the wrong approach, that we were abandoning the way that had brought us success in that 2008 semi-final — and sure enough, both times we got outplayed.”

While Manchester United have traditionally played their football on the front-foot, Rooney clearly feels Sir Alex Ferguson should have played a more pragmatic game plan in pursuit of glory.

“There is being true to the club, but then there’s sitting back afterwards and thinking ‘we lost’,” Rooney added.

“For me, it doesn’t matter how you do it in these big Champions League games, as long as you win — look at how Liverpool ground it out in last year’s final — and I think [Madrid boss Zinedine] Zidane has the same mindset.”