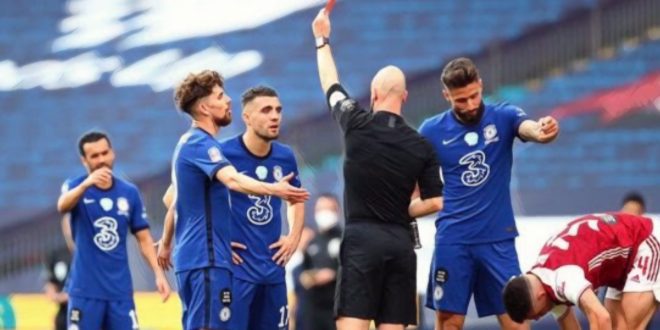 Bad Boys: The six players sent off in the FA Cup final

Mateo Kovacic endured an FA Cup final appearance to forget after being sent off in Chelsea’s 2-1 defeat to rivals Arsenal at Wembley this weekend, the Croatian dismissed in controversial circumstances by referee Anthony Taylor.

Kovacic’s early bath saw the midfielder join an exclusive group to hold the unwanted distinction of being dismissed in an FA Cup final, and we’ve decided to revisit the six players to have seen red.

Here are the six players who have been sent off in FA Cup finals:

Kevin Moran will forever be remembered as the first man ever to be sent off in an FA Cup final, the former Manchester United defender dismissed for a sliding tackle on Everton’s Peter Reid during the 1985 showpiece.

The Irishman’s wild and mistimed challenge prevented Reid racing through on goal and would largely be viewed as a certain red in the modern game, but referee Peter Willis’ decision – in his final fixture before retirement – stunned the watching world and drew fierce criticism.

It mattered little to the end result, however, as 10-man United secured a 1-0 victory in extra-time, Norman Whiteside – who became the youngest ever FA Cup final goalscorer two years earlier – netting a winner to secure the trophy for the Red Devils and prevent league champions Everton from sealing a domestic double.

It took two decades before another player saw red in an FA Cup final, the late Jose Antonio Reyes given his marching orders during Arsenal’s clash against Manchester United in 2005.

The two sides had shared a duopoly on the Premier League for a decade and played out a tense contest at the Millennium Stadium in Cardiff, though it was United who largely dominated despite a goalless scoreline.

Neither side failed to make a breakthrough in the extra period and Arsenal were reduced to 10 in the final act of the additional half hour, Reyes receiving a second yellow card after a clumsy foul on Cristiano Ronaldo, the Spaniard having earlier been cautioned for a late challenge on Mikael Silvestre.

Reyes’ red saw him become just the second player to be sent off in an FA Cup final as the showpiece headed to a penalty shoot-out for the first time, Patrick Vieira scoring the winning spot-kick for the Gunners after Paul Scholes had seen his effort saved by Jens Lehmann.

Wigan produced one of the greatest cup final upsets of all-time after beating Manchester City in 2013, Ben Watson’s last-minute goal writing his name into the history books as the club won their first ever major trophy at Wembley.

Roberto Martinez’s side produced a battling display against the previous season’s Premier League champions to claim a shock success, though their challenge was made somewhat easier following Pablo Zabaleta’s red card with six minutes remaining.

The Argentina international scythed down Callum McManaman after City were played into trouble by Gareth Barry’s loose pass, Zabaleta’s marching orders adding to a miserable afternoon in which Wigan’s underdogs rose to the occasion in style.

Manchester United became the first side in history to have two players sent off in FA Cup finals in 2016, Louis van Gaal’s side surviving Chris Smalling’s extra-time red card to beat Crystal Palace at Wembley.

Smalling’s afternoon was ended in extra-time after bringing down Yannick Bolasie near the half-way line, the defender’s eagerness to win the ball resulting in him hauling down the winger and receiving a second yellow card after being swiftly turned.

Kovacic’s red card this weekend saw Chelsea join Manchester United in having had two players sent off in FA Cup finals, their first having come just three years ago as Victor Moses was dismissed for two bookable offences.

Moses received his first yellow card after wrestling Arsenal’s Danny Welbeck to the ground just before the hour, before leaving the field in disgrace 11 minutes later after diving in a desperate attempt to win a penalty as the Blues chased an equaliser following Alexis Sanchez’s early opener.

Chelsea – who had romped to Premier League title success under Antonio Conte – somehow found an equaliser via Diego Costa despite their man disadvantage, though they were level for just three minutes as Aaron Ramsey hit the second FA Cup final winner of his career to secure success for Arsenal.

The most recent inclusion in this list and perhaps the most controversial, Kovacic sent off in eerily similar circumstances to that of Moses just three years earlier.

This weekend’s FA Cup final was once again contested by London rivals Arsenal and Chelsea, and it would be the former who again emerged as 2-1 victors following Anthony Taylor’s decision to dismiss a Blues’ player with the tie finely poised.

Kovacic got a second yellow for this 👀 pic.twitter.com/Mg4rt4vKS1

It was Taylor who sent off Moses in the 2017 final and the referee showed no hesitation in reaching for a second yellow card following Kovacic’s challenge on Granit Xhaka, despite replays showing the bemused midfielder made minimal contact with the Switzerland international.

The decision ultimately aided Arsenal’s hopes of holding the advantage handed to them by Pierre-Emerick Aubameyang’s brace, the Gunners lifting the trophy for a record-extending 14th time as Mikel Arteta claimed the first major honour of his managerial career.