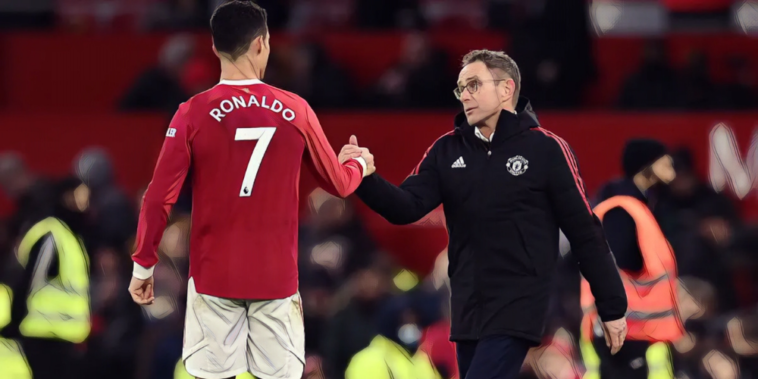 Cristiano Ronaldo has backed Ralf Rangnick for success at Manchester United, but admits the sacking of Ole Gunnar Solskjaer was ‘sad and tough’.

United appointed Rangnick as interim manager until the end of the season following the decision to sack Solskjaer, with the German having since endured an underwhelming start with the Red Devils remaining unconvincing in their performances.

Ronaldo, however, has backed Rangnick to be a success at the club and says the 63-year-old ‘needs time’ to implement his ideas across to the squad. The Portugal captain insists it is ‘not that easy’ to make immediate change and believes Rangnick will do a ‘good job’ at Old Trafford.

“Since he arrived five weeks ago he changed many things,” Ronaldo told Sky Sports. “But he needs time to put his ideas across to the players.

“It takes time but I believe that he is going to do a good job. We know we aren’t playing the best football but we have many games to improve.

“Since he arrived I think in some points we are better, but he needs time. It’s not that easy to change the mentality of players and the way they play, the culture, the system like that. I believe that he is going to do a good job.”

Ronaldo discussed the departure of Solskjaer, having been a former teammate of the Norwegians before returning to the club this summer to play under his management.

The 36-year-old described the sacking of Solskjaer as ‘sad and tough’ but has now called on the squad to ‘work hard’ as the Red Devils look to improve under Rangnick.

“Not easy to be honest,” Ronaldo said on Solskjaer’s exit.

“We changed Ole, then [Michael] Carrick [caretaker manager], then this new coach. It’s difficult when you change so much, it’s always tough.

“It’s always sad and tough. Ole used to play with me before and now he was the coach. A fantastic person. When he left everybody was sad, but it’s part of football.

“When things don’t go the way the club wants, the club has to change. I was disappointed but we have to understand the club. It was difficult but life continues.

“But I still believe that we are capable of doing a good season. We know it’s going to take time to make the ideas of the new coach on the pitch.

“But I’m looking forward. We have to work hard, we have to be together as players. We know we are not in the best moment, but I believe with working hard we can achieve important things, even this year.”

Read – Opinion: Newfound riches will not save Newcastle from pending relegation