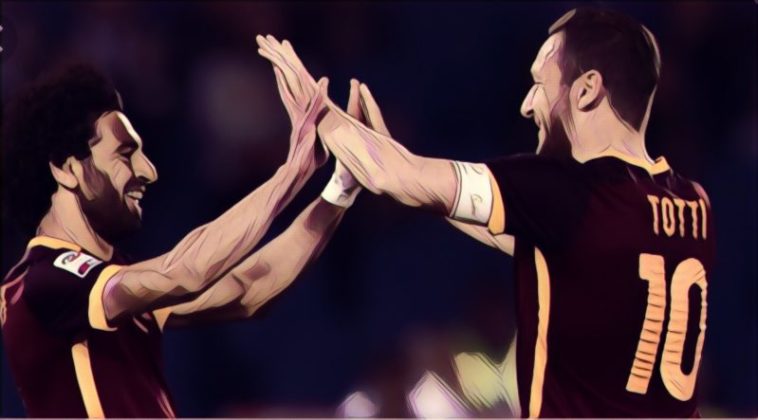 Roma legend Francesco Totti has admitted that he is surprised by just how well his former team-mate in the Italian capital Mohamed Salah has performed since moving to Liverpool in a £38 million deal last summer.

The Egyptian international has been in sensational form since swapping the Stadio Olimpico for Anfield, scoring an incredible 31 goals and providing nine assists in the Premier League this season.

The 25-year-old’s electric displays for the Reds were recognised by his peers on Sunday night when he was voted PFA Player of the Year and he needs just one more goal to break the record for the most amount of goals scored in a 38 game EPL season.

Liverpool will face Roma tomorrow night at Anfield in the first-leg of their Champions League semi-final and the Serie A sides greatest ever player Totti has admitted that he did not expect Salah to make such an outstanding impact at his new club, although he also gave credit to Reds boss Jurgen Klopp for getting the best out of the talented attacker.

“This season I’ve seen a number of games of Liverpool, especially because Mo Salah is now playing there, I’ve been following it consistently,” Totti told Liverpool’s official website.

“Especially after the draw, over the past few days I’ve been watching their Champions League games and I really think it’s going to be a tough game for both teams.

“To some extent, it surprises me that [Salah] has been doing so well in his first season at Liverpool.

“But, on the other hand, considering the quality of the squad, the coach they have – Klopp, to me, is one of the best coaches in the world – it didn’t surprise me.

“They put him in the condition to express himself at his best.”

TO CHECK OUT 10 OF THE BEST TOTTI QUOTES CLICK HERE !