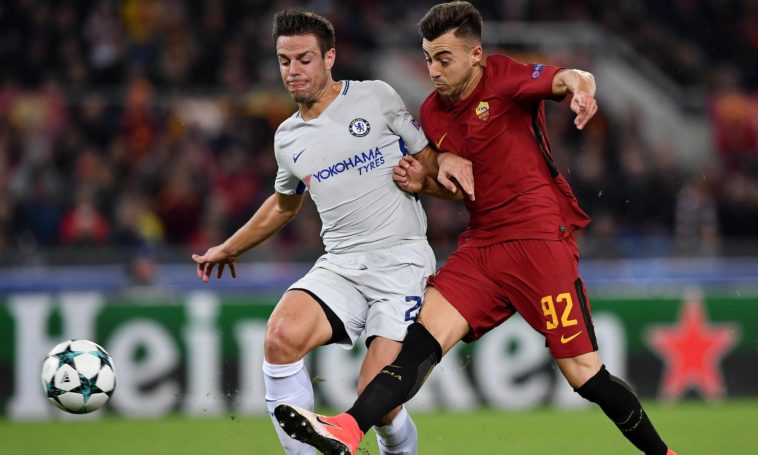 Roma are a unit

Everyone knew their job, everyone employed it expertly and everyone complemented one another.

Kolarov was spraying passes as he always does. He played a part in El Shaarawy’s opening goal and assisted Roma’s third (Perotti’s). He was simply incredible, he had 13 more touches than anyone else (92) and was Man of the Match. He was part of a defensive line that looked solid, a keeper that when called upon played well. Daniel de Rossi who even at 34, is still a rock in the centre of the field. Nainggolan who isn’t always applauded had a decent game, a complete centre forward in Dzeko and two sprightly wingers, who were both clinical. A very strong XI and the three that came off the bench also looked competitive.

Roma looked a complete package last night. Whether they’ll challenge for the league and have a run in the Champions League is to be seen, but have no doubt this is a very strong Roma side, who most teams won’t relish playing. Could an Italian side win the Champions League this year? These are certainly a strong contender.

Chelsea’s defence was such a pivotal part of their title winning side last season that it’s a bit difficult to pin-point why it is coming unstuck. Conceding 6 in two ties against Roma, 2 to Watford, 2 to Palace, this isn’t a one-off, something is wrong.

Yes, Moses is injured and was very important last season, but that still leaves 4 of the 5 there. Azpilicueta played every minute of the last season’s Premier League, equating to roughly 57 hours and he spent the majority of it as a right sided centre back. Last night he played on the right wing, a position he has also played incredibly well at Chelsea but not the position he spent the majority of last year playing. Rudiger came into the back three and filled in his position, though he was at fault for Roma’s second goal, he’s not looked bad this season, so I’m not sure he’s too blame.

There is an unpredictability in the line-up this season though. In the reverse tie against Roma, David Luiz went in the midfield and Zappacosta and Christensen took up the right wing and centre back roles. They need to settle on a defensive line soon, or they’re going to keep shipping goals in. Chelsea were England’s best pick for he Champions League this season, we need them to regain that stability at the back if they are going to live up to those expectations.

Chelsea really miss N’Golo Kante. You see what happened with Leicester when he left, when he’s injured and not available for Chelsea or France. He is a big miss and perhaps the defence looks so unstable because he isn’t in front of it making interceptions and limiting chances.

His importance is so that since he has been injured Chelsea have conceded in all bar one game (Bournemouth), they have conceded 10 goals in 5 games. By last year’s champions’ standards that is remarkably high. Bakayoko looks a player but he isn’t a Kante, nor is he a Matic, Chelsea need Kante back stat, preferably in the line-up against United if they want to get a result.

Morata is not in form

He had a wonderful start to his Chelsea career scoring six in six league games. He’s netted once in the Champions League too, so seven goals in 11 games is a decent return. However in the last few games, he’s missed chances you’d expect him to score, a couple against Bournemouth in the last league game, and a sitter against Roma.

Many will compare him to Costa, and while he certainly has some great attributes, he is often put down for being ‘too nice’ on the pitch, something Costa never was. Given that Chelsea don’t have a wealth of options for strikers and Conte obviously prefers to use Batshuayi as an impact sub, Morata is going to have to be rougher, if only to put some fear into the defenders.

Dzeko is every bit as good as he was at City

Back to the positives, Dzeko is every bit as good as he was for City. He was clinical and a great target man. He holds the ball up well, plays others in. The commentator gave him man of the match despite not scoring which shows his importance. He knows he has runners around him and relishes it. He had one assist and really should have had another but for poor finishing from his teammate.

Good “target men” are in short supply, and their importance should not be dismissed. Andy Carroll, Benteke, Giroud, Crouch, most these guys may not win golden boots or be in your team of the season but they are a necessity to every squad and they’ll always get a handful of goals. Passing it through a defence doesn’t always work. At 31, Dzeko may be evading his prime, but there are plenty of clubs around Europe that could use him and if he keeps playing as he is, offers will start flooding in.